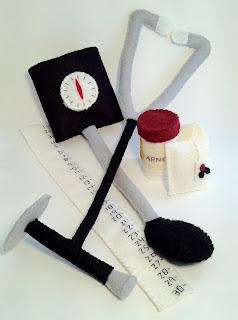 In case you are wondering why my blog has been so dead lately, I'm finally writing up a post to tell you. Recently, Brittany over at Bella Lane Boutique had asked me to make a felt doctor set for her kiddos. I had found a pattern for a doctor kit in Jeanette Lim's Big Little Felt Universe, but the idea wasn't really unique. Knowing Brittany had her youngest baby in a birth center with midwives in attendance, I started to ruminated on what a felt midwife's kit would look like instead. I asked on the MFC Facebook page what items should be included in the birthy set, and got lots of great responses. I ultimately decided on a kid-sized fetoscope, blood pressure cuff, red raspberry leaf tea, bottle of homeopathic arnica, measuring tape and a carrying bag. Here is a little run-down of everything in the set and how real life midwives would use each item. 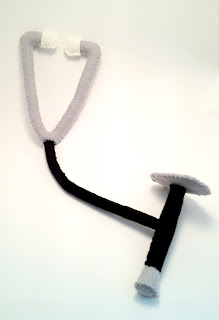 Before the days of hand-held dopplers and readily available ultrasounds, midwives used fetoscopes to listen to the baby. Many midwives still use fetoscopes as the safety of ultrasound devices is still rather questionable. The flat end generally rests against the midwife's forehead and the cone end is placed on the mother's belly. You can see my silly husband demonstrating on my 37 week pregnant belly here: 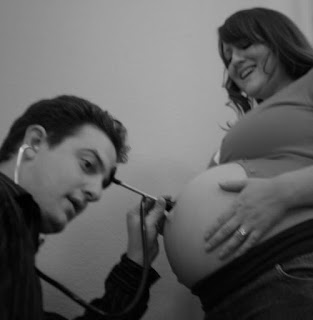 Next is the blood pressure cuff: 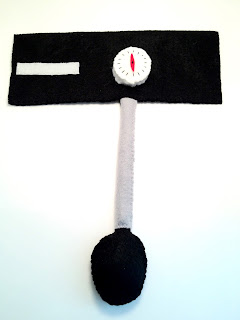 This item is used routinely in prenatal care to keep track of the mother's blood pressure. Her pulse is also taken. High blood pressure can be a sign of complications like pre-eclampsia, so it is important to keep an eye on it throughout pregnancy. I sewed a bellowed squeaker toy (ok, it's really a Kong dog toy squeaker) into the bulb part of the cuff so that it would have a realistic pumping feel. 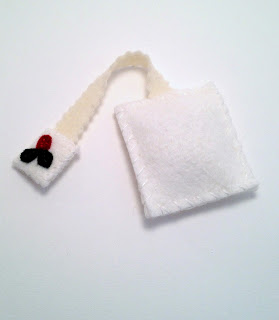 Red Raspberry leaf tea has been used by midwives for ages. Raspberry leaf tea helps tone the uterus, making contractions more effective. It is also known to help stave off hemorrhage, ease morning sickness, reduce labor pains, and aid in milk production. Red raspberry leaf contains a slew of good vitamins such as C, E, A, and B complex, as well as minerals including phosphorous and potassium. 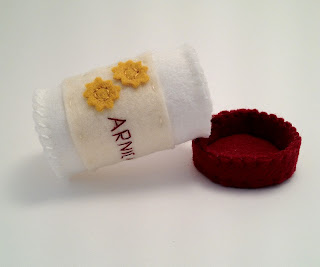 Arnica Montana is a yellow flower that looks like a daisy. This remedy has also been used for centuries to relieve bruising, sprains, reduce inflammation and promote healing. I took arnica right after Asher's birth and the day after when I was one big ball of sore. This felt bottle has a removable lid and a bell inside so it makes a fun sound when the "medicine" is dispensed. 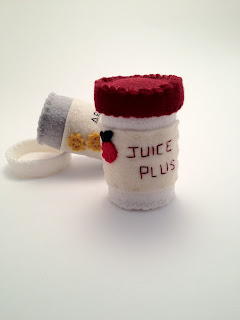 Brittany, who sparked the first midwife set I made, requested a bottle of "Juice Plus," the brand of vitamin supplement she takes. The label has a little apple applique on it. 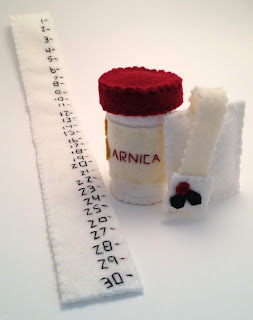 I originally made the measuring tape 12 inches long. After the first set, I decided to switch the unit of measure. Most midwives (especially those outside the US) use centimeters to record fundal height (how big the uterus is growing), dilation and baby's measurements. Since there are 30 cm in 12 inches, this tape also has more digits for number recognition and counting fun. 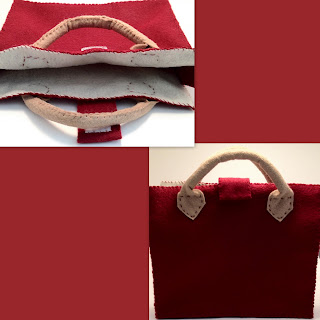 Lastly, there had to be a bag to carry all the midwifery items. The first one I made was cranberry (placenta?) red with a cream colored lining. It's always important for a midwife to keep her bag packed and ready, as you never know when a baby decides to enter the world!


This set is probably the best I've created and closest to my heart. Making each one is a labor of love. If you would like me to make one for you, you can find it on Etsy. Ten percent of the purchase price goes to Citizens for Midwifery, a non-profit organization working to increase local access to midwives and supports the Midwifery Model of Care. 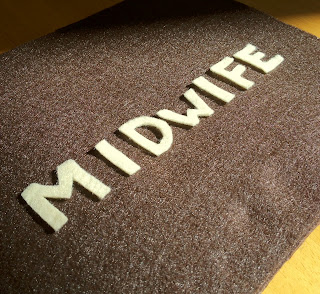 Encouraging midwifery play is important. If we wish to normalize birth for our children, we must give them the tools to understand the mechanism of birth and allow them to process the information in a way that makes sense to them. Imaginative play does both.  I have seen parents who are planning home or out-of-hospital births look for ways to help prepare their child for a sibling's arrival and come up rather empty handed. There were no other midwife play sets on Google or Etsy, though doctor toys are common place (and medical idolization starts early in our culture). But as an increasing number of families look to have their baby outside the hospital setting, we can work with the next generation to make peaceful birth a realized, every day occurrence.