How to turn an Ergobaby Carrier into a TARDIS 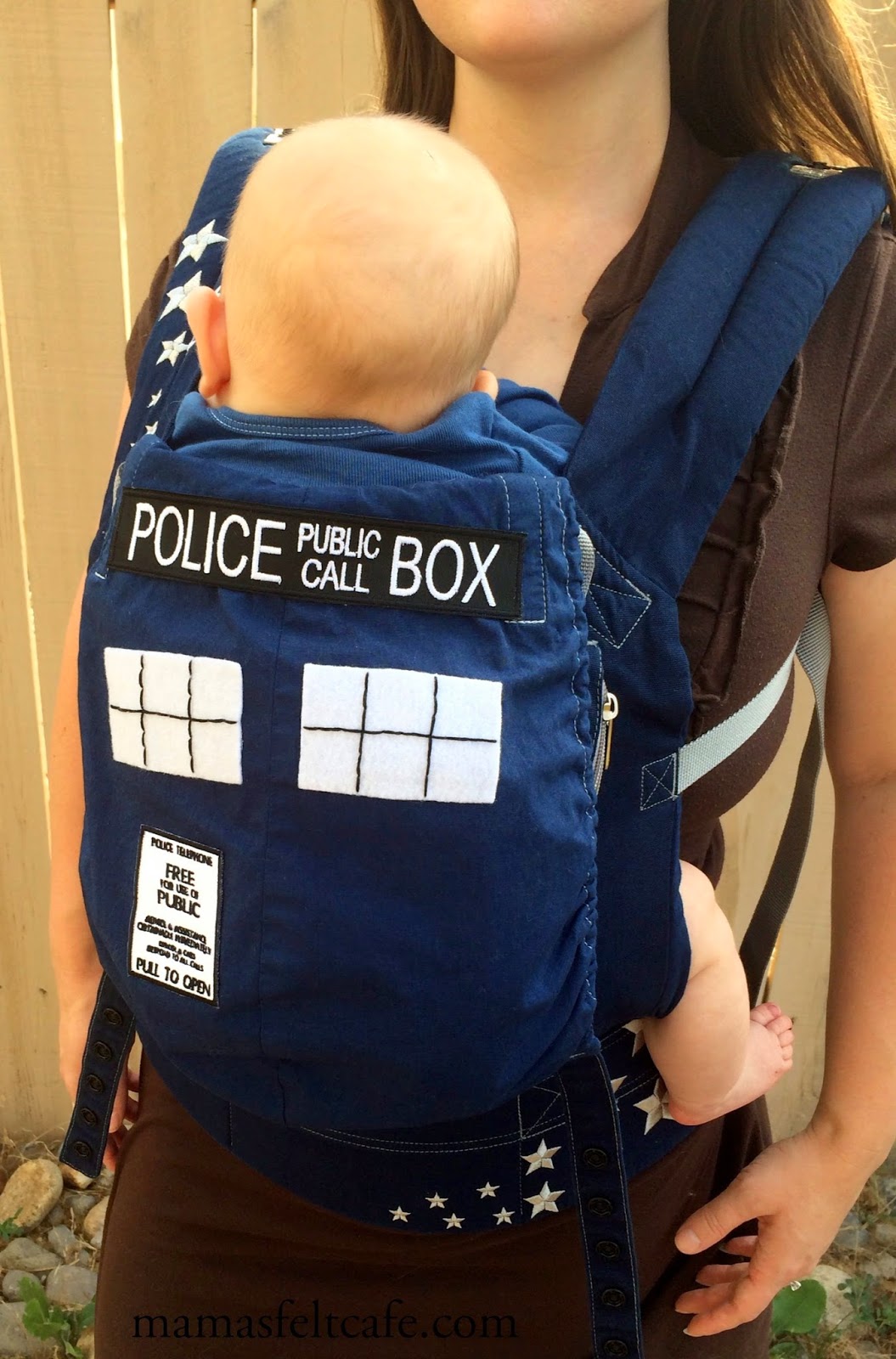 It's been over a year since I posted a blog and something fantastic has happened since then; I gave birth to a baby girl! Arielle Eve was born at home on May 1 after an intense labor. Like many babies, she wants to be held and we have started over with Adventures in Babywearing. A new carrier I've tried this time is a linen ring sling, ours made by Willow Tree Slings. Jenn was kind enough to make me a "plain" one and I embellished it with this Van Gogh inspired Doctor Who fabric pocket. 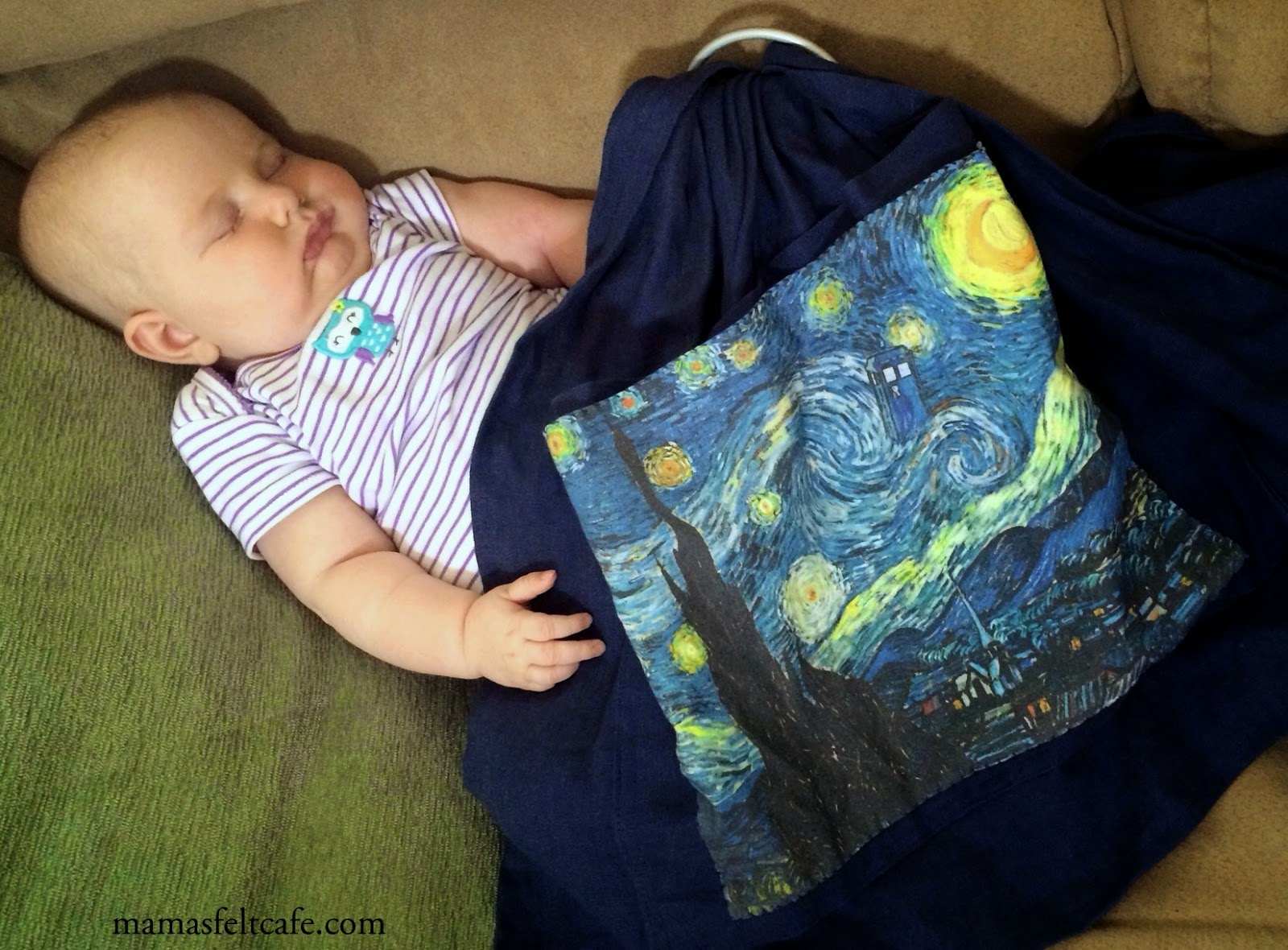 Apparently, this was not enough to satisfy my need to mix babywearing and Doctor Who. When I learned that Ergobaby carriers are fairly easy to dye, I had to try it out with our Galaxy Gray Ergo. Even the name, galaxy gray, sounds like it is describing the lonely, ageless space traveler and I thought it would be perfect to turn into a TARDIS. 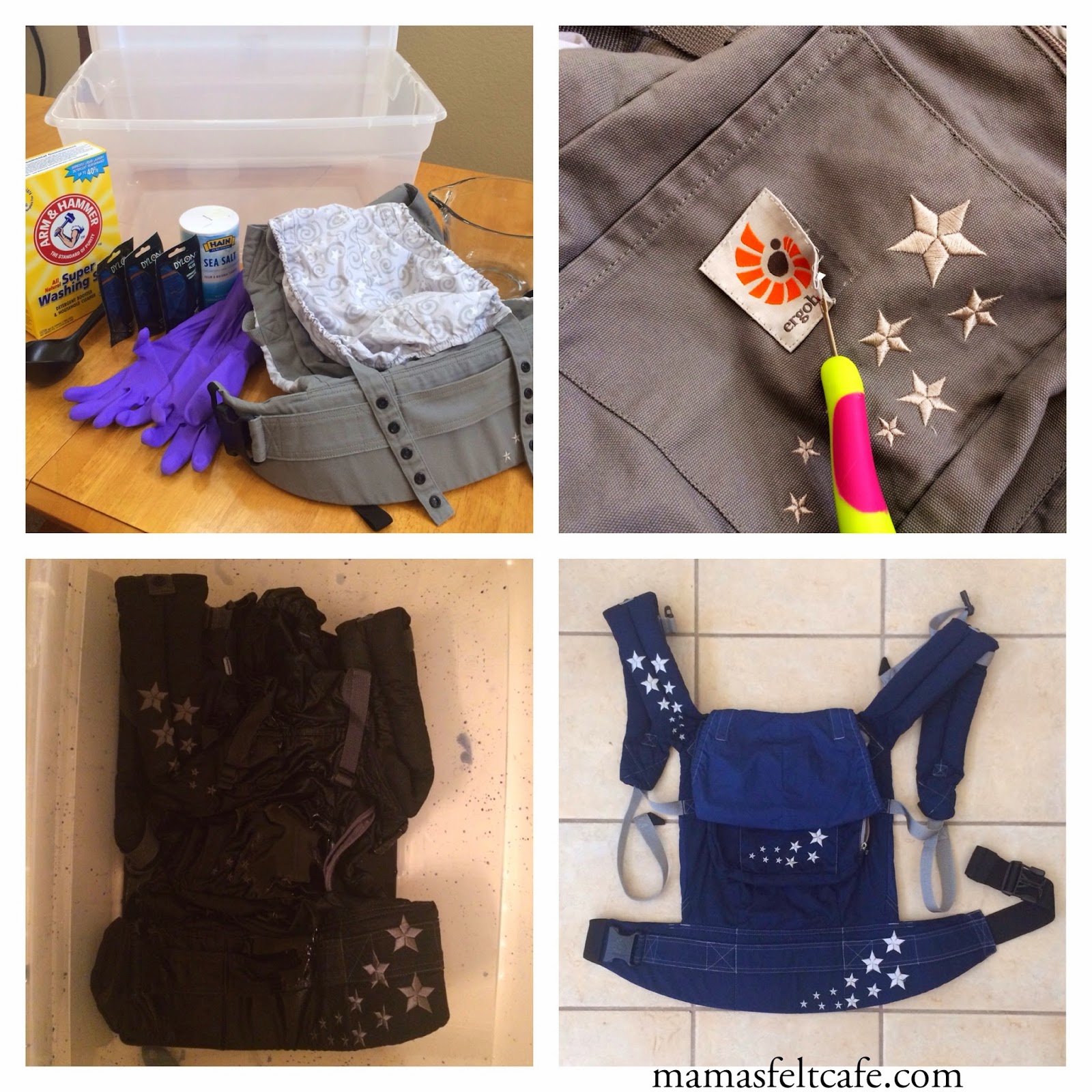 First, I gathered all the dyeing supplies I would need: Plastic bin to tub dye in, Super Washing Soda to help fix the color, a nylon ladle to mix and distribute the dye, three packets of Dylon brand dye in Jean Blue, non-iodized sea salt to add to the dye mix, kitchen gloves, a large measuring cup and a recently washed Ergo. I also got a seam ripper and took off the tags from the hood and pocket of the carrier. Next I soaked the Ergo in a mixture of 1 gallon warm water and 1 1/3 cups Super Washing Soda for 30 minutes (not pictured). I then drained off the mixture, wrung out the Ergo and let it sit over night so I could dye it the next morning while my daughter was napping. Then I dyed the Ergo with the 3 packets of Dylon dye, 12 tablespoons salt and 12 cups of lukewarm water. Mix the salt into the water then add the dye packets. Stir thoroughly until the dye is fully incorporated and not "crunchy" at all. Add the soda soaked damp Ergo to the dye and swish it around in the tub for 45 minutes. Don't let it sit in one spot for more than a couple minutes or the dye job might be uneven. I also threw in a couple onesies so they would match the Ergo. Then rinse with cold water for forever. Ok, not quite that long but until the water is totally clear which is going to take a while. Give it a wash in hot water and liquid detergent and air dry. Now your Ergo is Tardis blue! The stars don't dye because they are polyester and the color reactive dye only works on the natural fiber of the cotton on the rest of the Ergo. 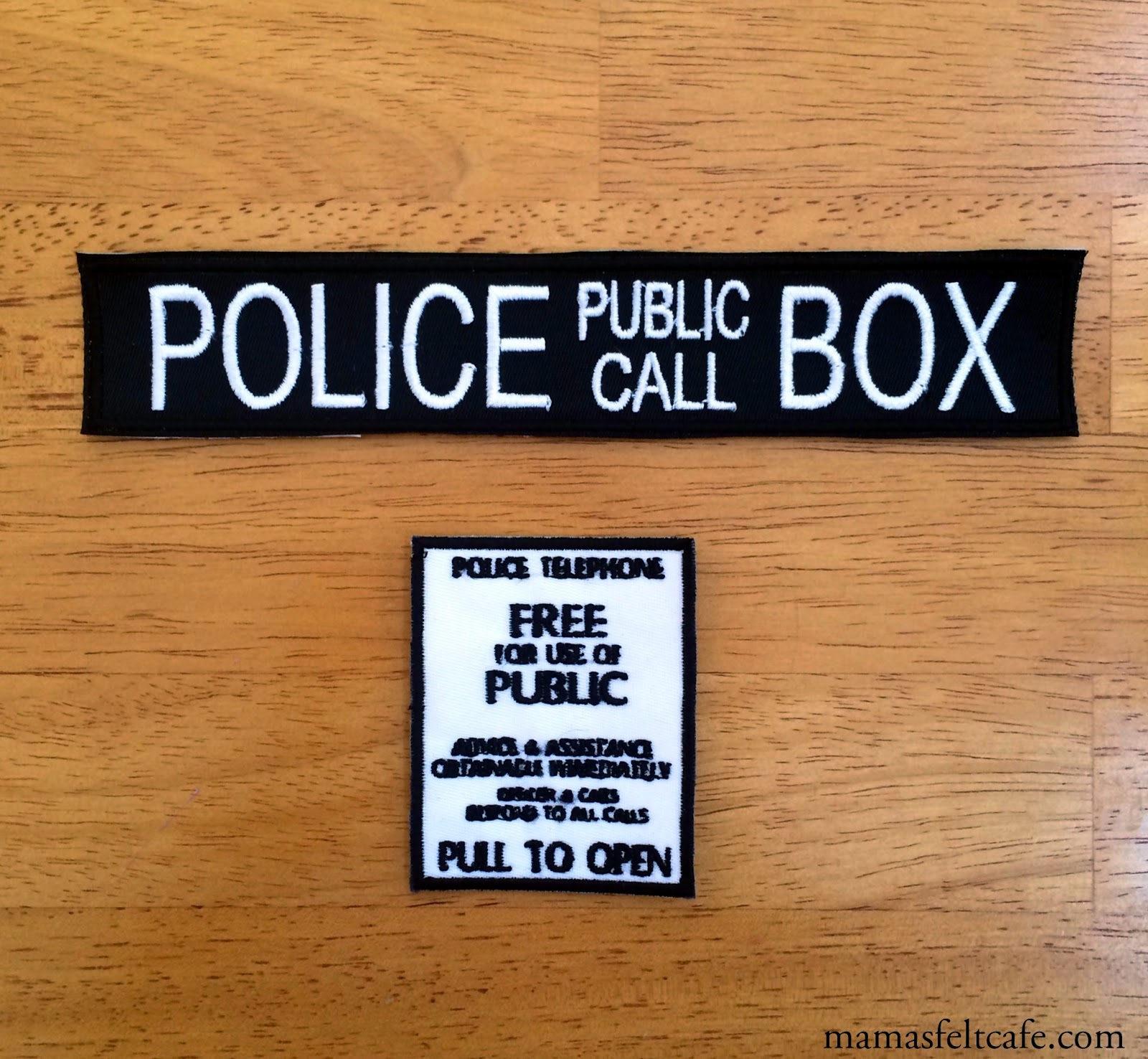 Now I wanted to add the appropriate wording to the Tardis colored hood. I ordered these patches from Pandora Productions on Etsy.  The Police Box patch is 7x1.25 inches and the Pull to Open patch is 2.53x2.04 inches. All I needed was to make the windows out of felt! 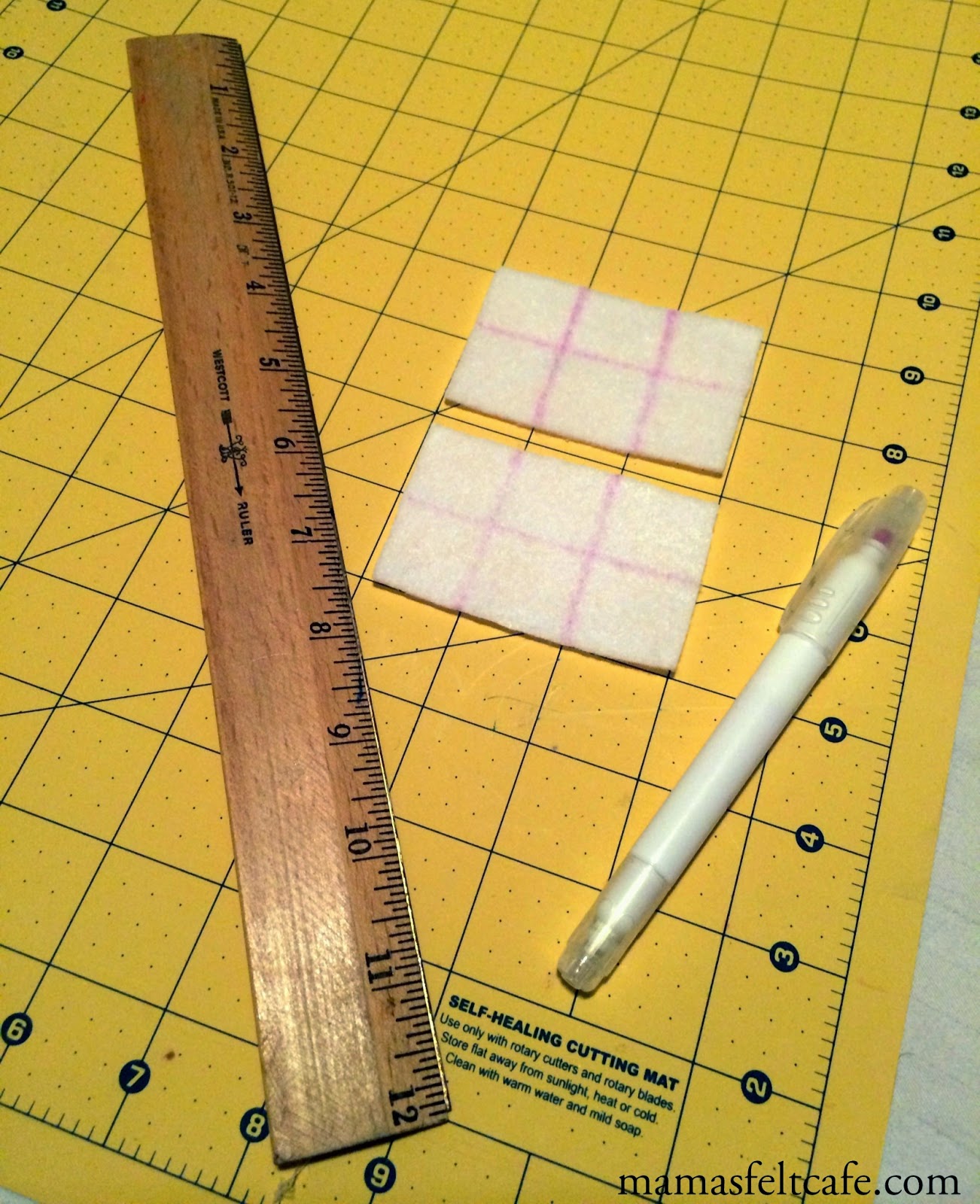 For this step, I would recommend using a rotary cutting tool and a self healing mat to cut your windows. Mine were supposed to be 3 inches long by 2 inches high but I eye balled this and cut them a little short. Use the grid on the mat to help mark off one inch squares with a disappearing ink fabric pen. 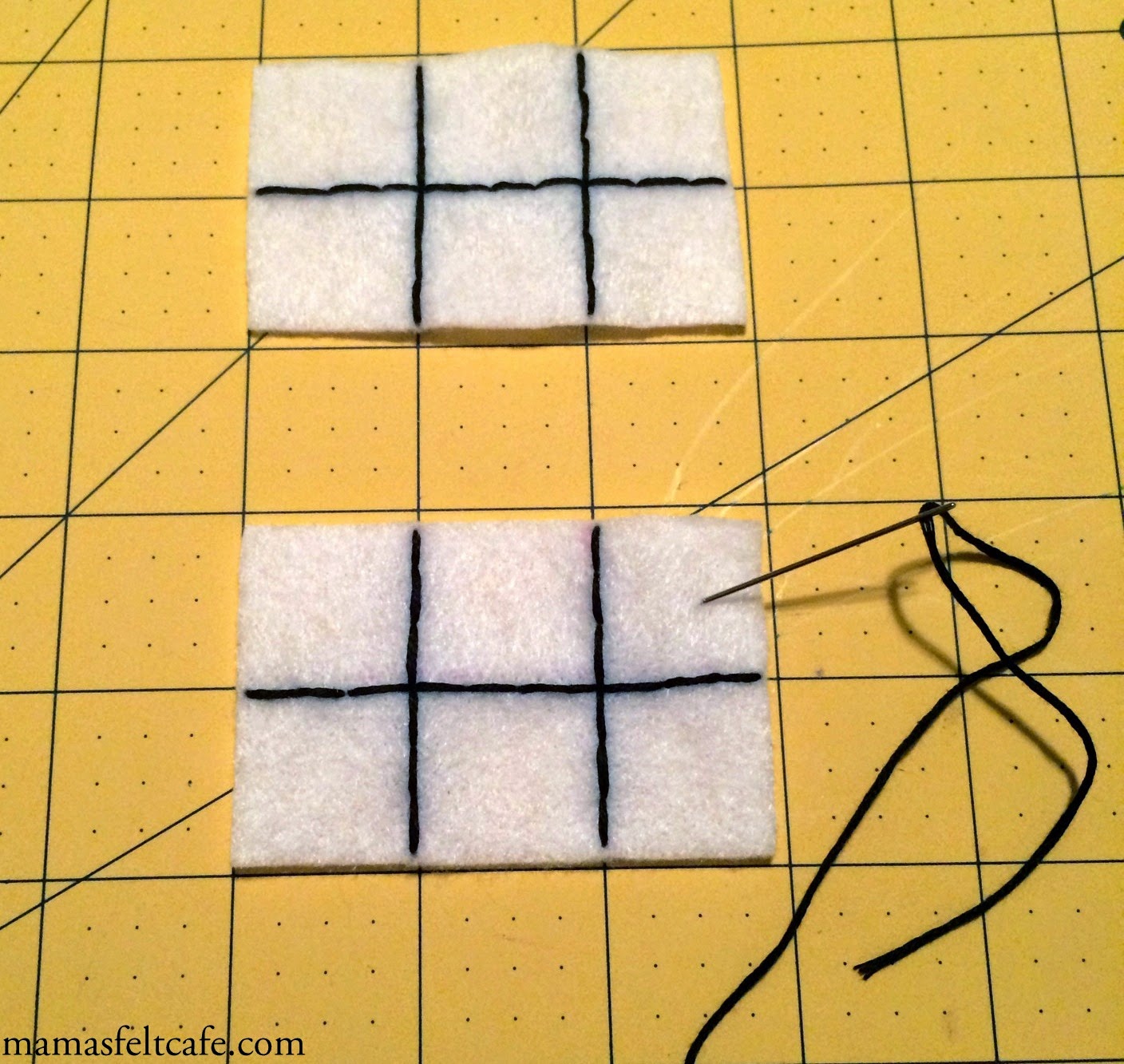 I then used all six strands of embroidery floss to back stitch the outline for the windows. 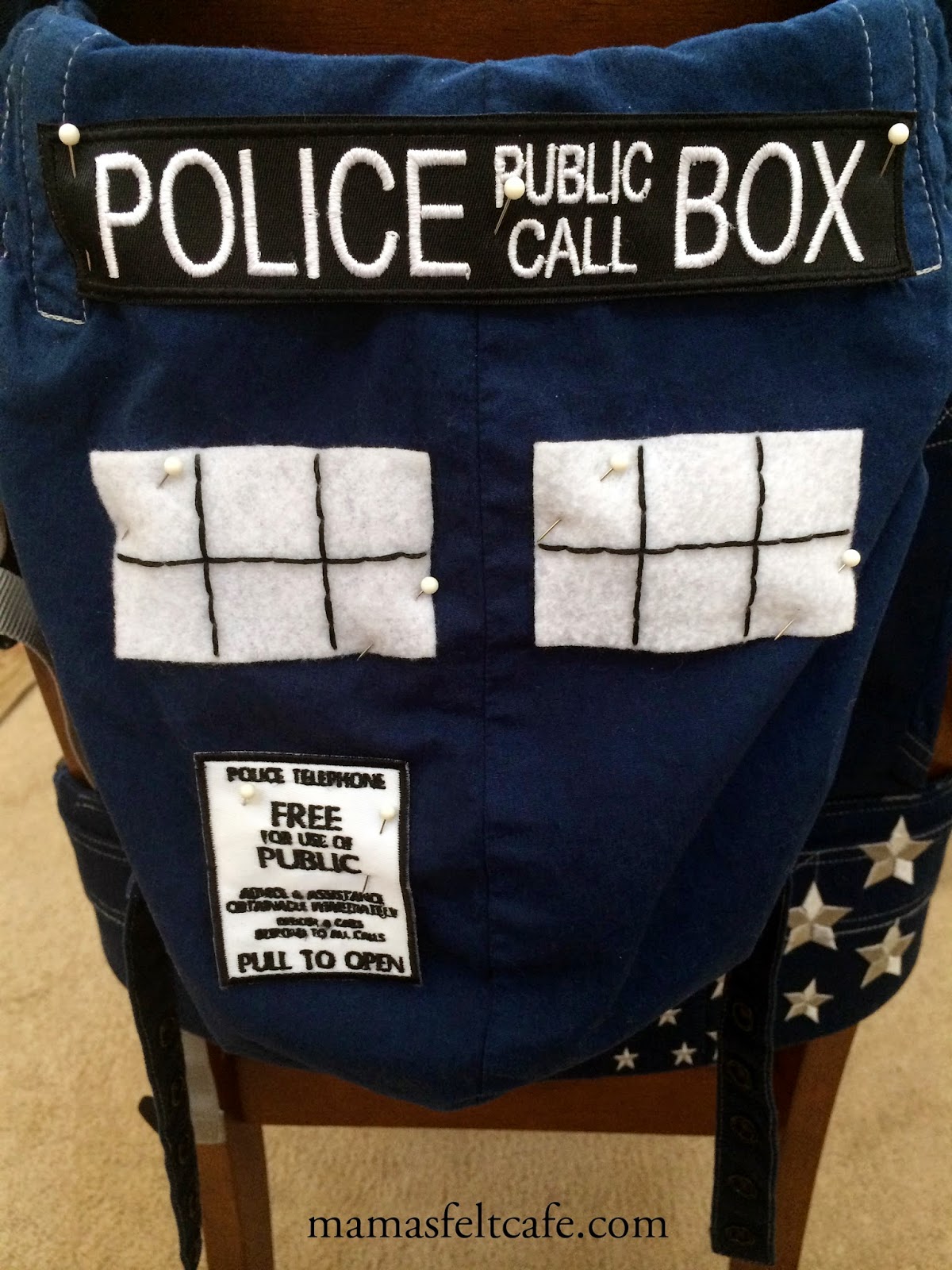 I decided to use permanent, washable fabric glue to apply the patches so I didn't have to sew them through the hood. Placing the patches was difficult because the hood of the Ergo is not flat. The easiest way I found to do this was to buckle the carrier around a chair and poof it out like there was a baby in it. Then you get a sense of how the fabric falls when it's actually worn. The line in the "P" for Public was the center line of the Police Box patch and I used the seam in the hood as a center guide. After it was pinned, I glued it carefully with Fabric-Tac, paying close attention to the corners of the patches. 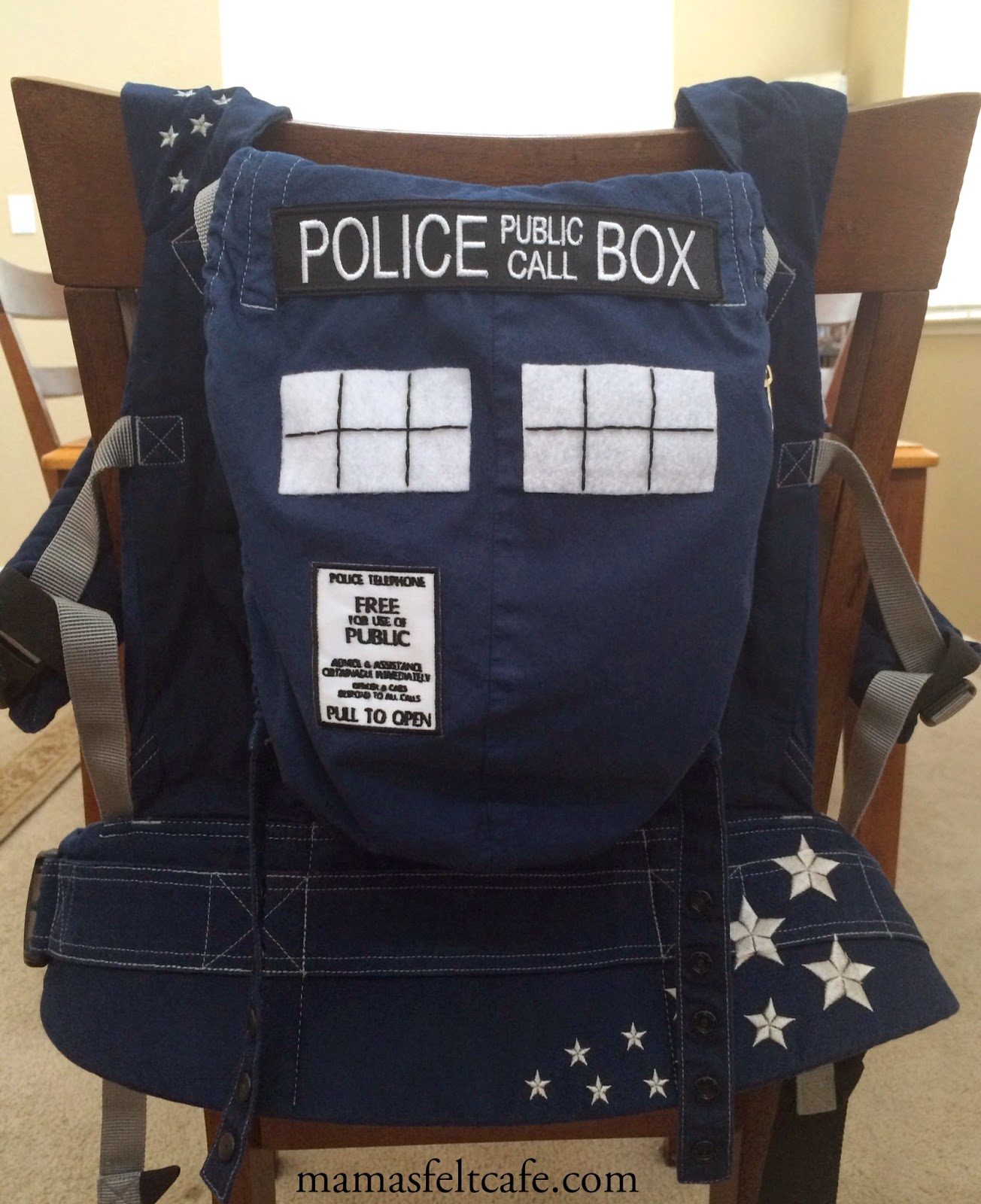 I let the glue dry while it hung on the chair. 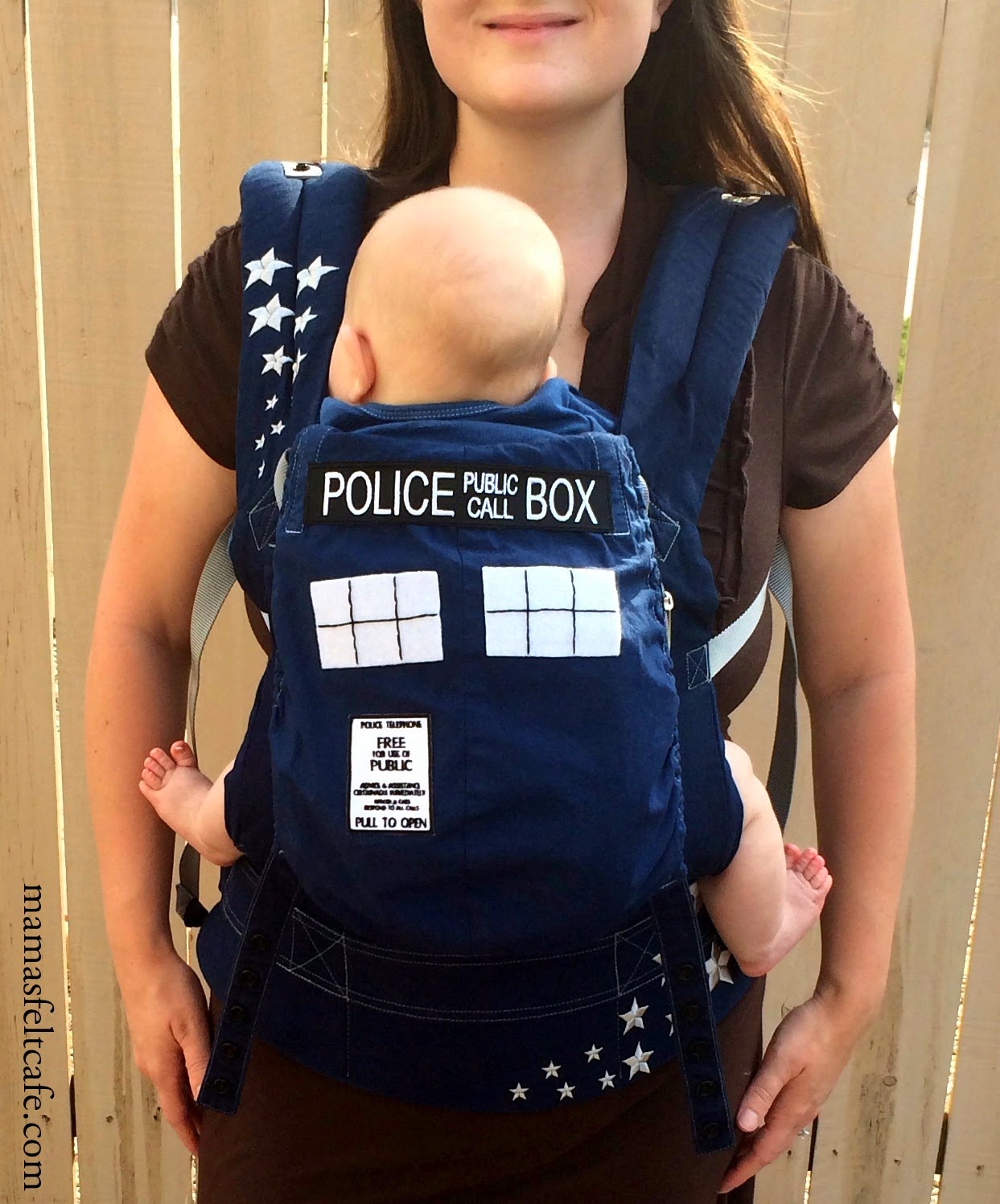 I really love how it turned out. I plan to have a friend knit a blue hat with a white pom pom on top so that baby's head is the light at the top of the Tardis. Add a pair of navy Babylegs and it's an awesome Doctor Who babywearing Halloween costume. I can't wait to take this fun Ergo through time and space. Allons-y!