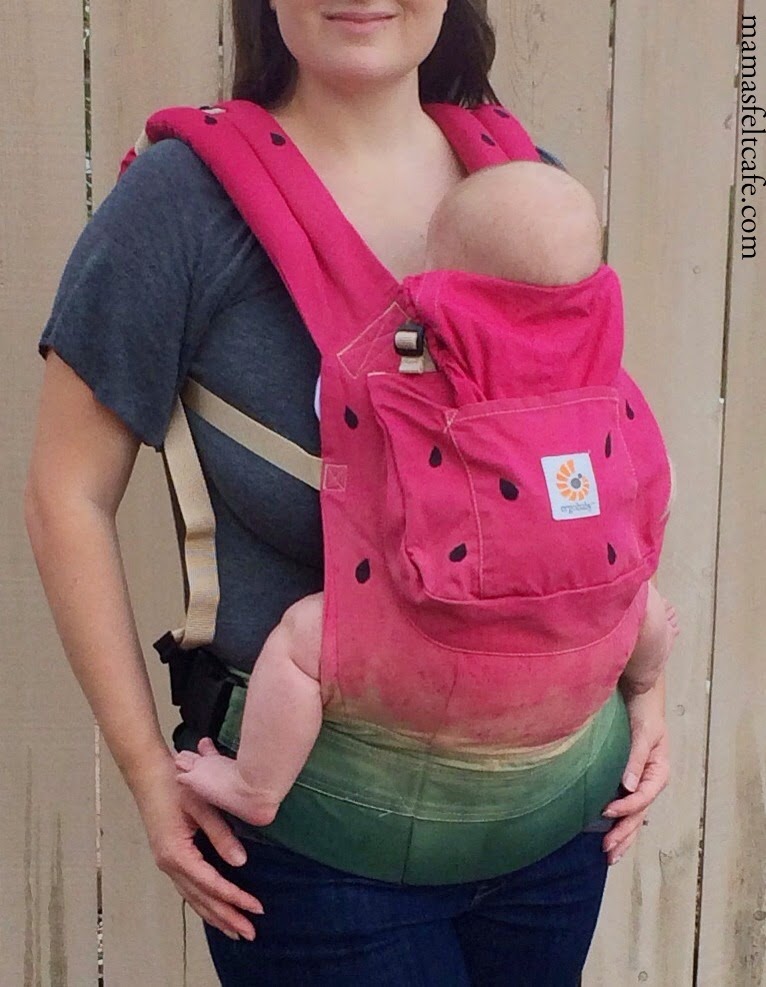 After completing an Ergo to Tardis redo recently, I was excited to try another baby carrier dye job. When REI put the camel Ergobaby on clearance, I took it as a sign to start another project. Enter the Watermelon Ergo. This was considerably more difficult than the dye for the Tardis, which was a solid color. This would require a gradient between the pink and green while leaving some natural to give the look of the rind. Give yourself plenty of time to work on this one because it will need more than one dye application. I will warn that I didn't take as many pictures of this process as I probably should have, but my daughter was napping and I was trying to get as much possible done while she slept. 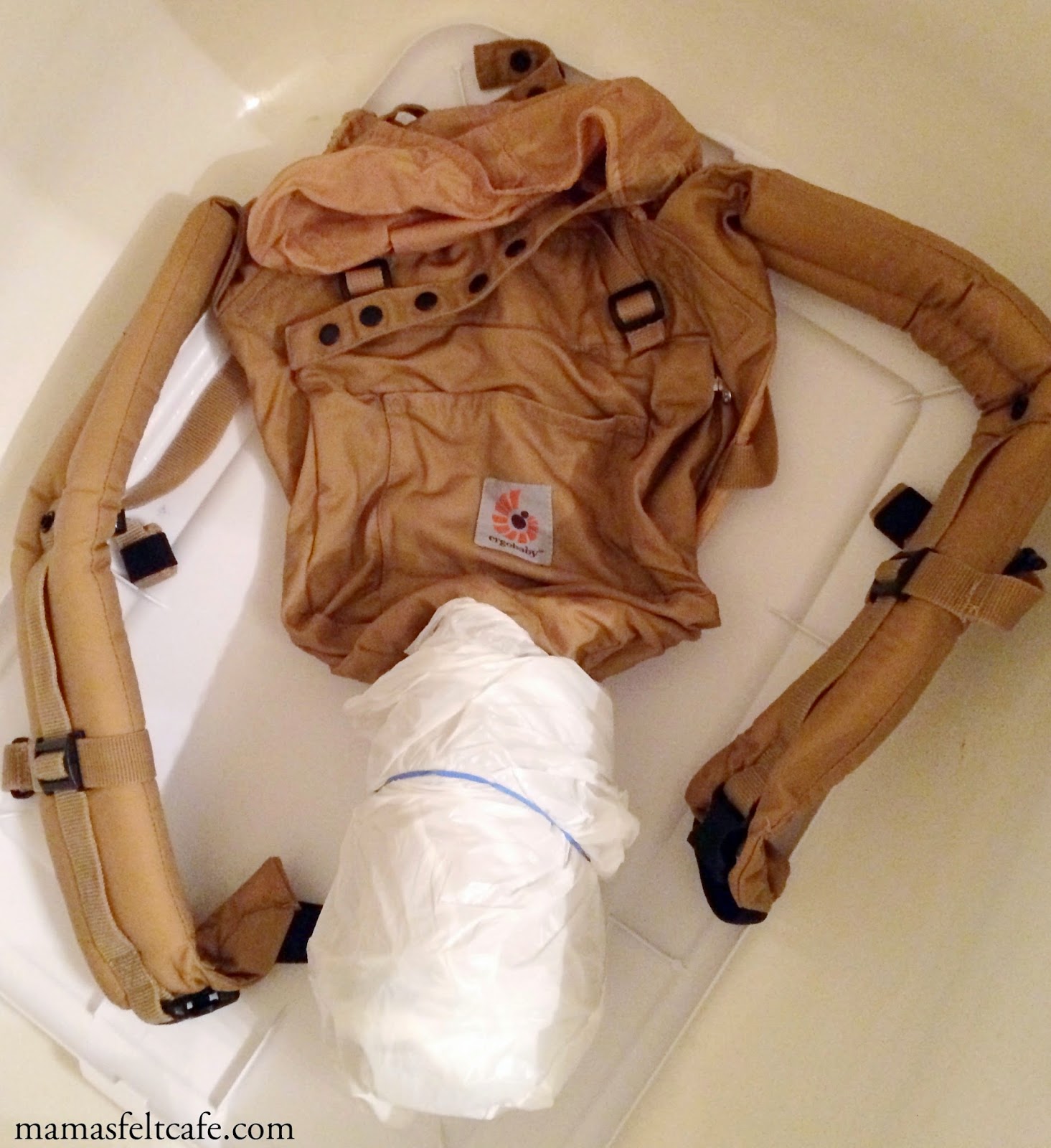 First, prep the Ergo by washing and drying. Then soak it for about 30 minutes in one gallon of water and 1 1/3 cup of Washing Soda (or a cup of Soda Ash). I wring mine out and leave it damp overnight. When you are ready to dye, wrap a couple plastic bags around the waistband of the Ergo and secure with rubber bands. This helps keep dye splashes to a minimum. Then prepare the dye. I used two packets of Dylon Tulip Red. I mixed 4 cups of hot water with 4 TBS of non iodized salt then added one packet of dye and mixed well. Like really, really well. There should be no clumps of dye in your solution. I didn't do a good enough of a job and ended up with some speckling. Don't make my mistake. Repeat the water and salt mix with the other dye pack and pour into a tub big enough for the Ergo. Starting with the straps (which I unbuckled), dip into the concentrated dye bath and lower down until you get to the bag at the waistband. Since I wanted the color to be graduated, I worked the straps most and was careful about getting the dye too close to the bag. After about 15 minutes, I rinsed in my bathtub until the water was pretty clear. Then I used a garbage bag and put all but the waistband in, securing again with rubber bands, basically bagging it in reverse. 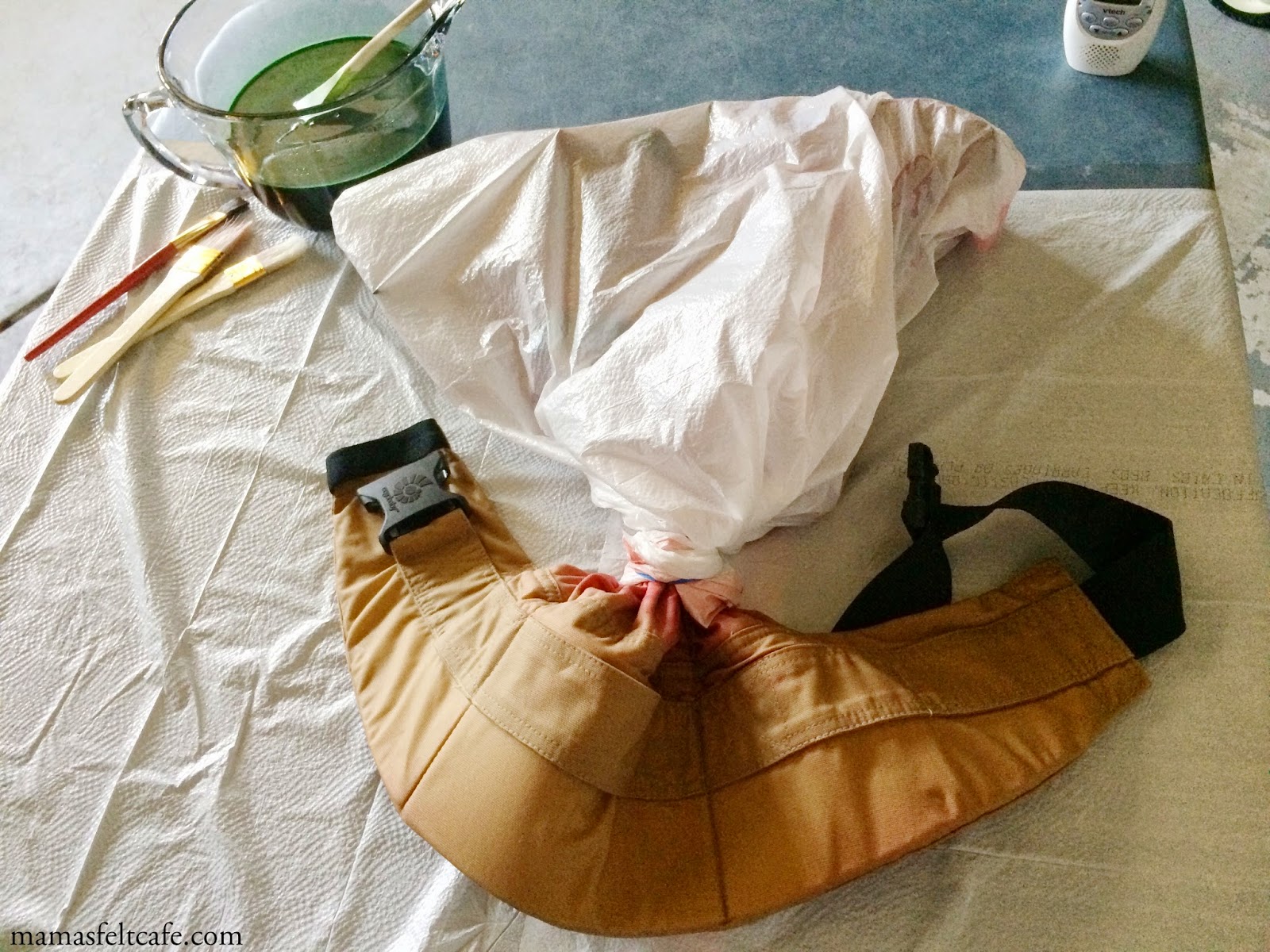 For the green dye, I moved to a covered table in the garage. I prepared a packet of Dylon Tropical Green in the same proportions as the red dye-- 4 cups hot water, 4 TBS salt and the dye pack. I put this in an extra large 8 cup measuring cup. I also grabbed some paint brushes. Do yourself a favor and get good quality ones. The brushes I bought at the craft store had bristles falling out all over. I started by painting a layer of dye on the waist band, trying to let any excess dye flow downward towards the bottom of the carrier. 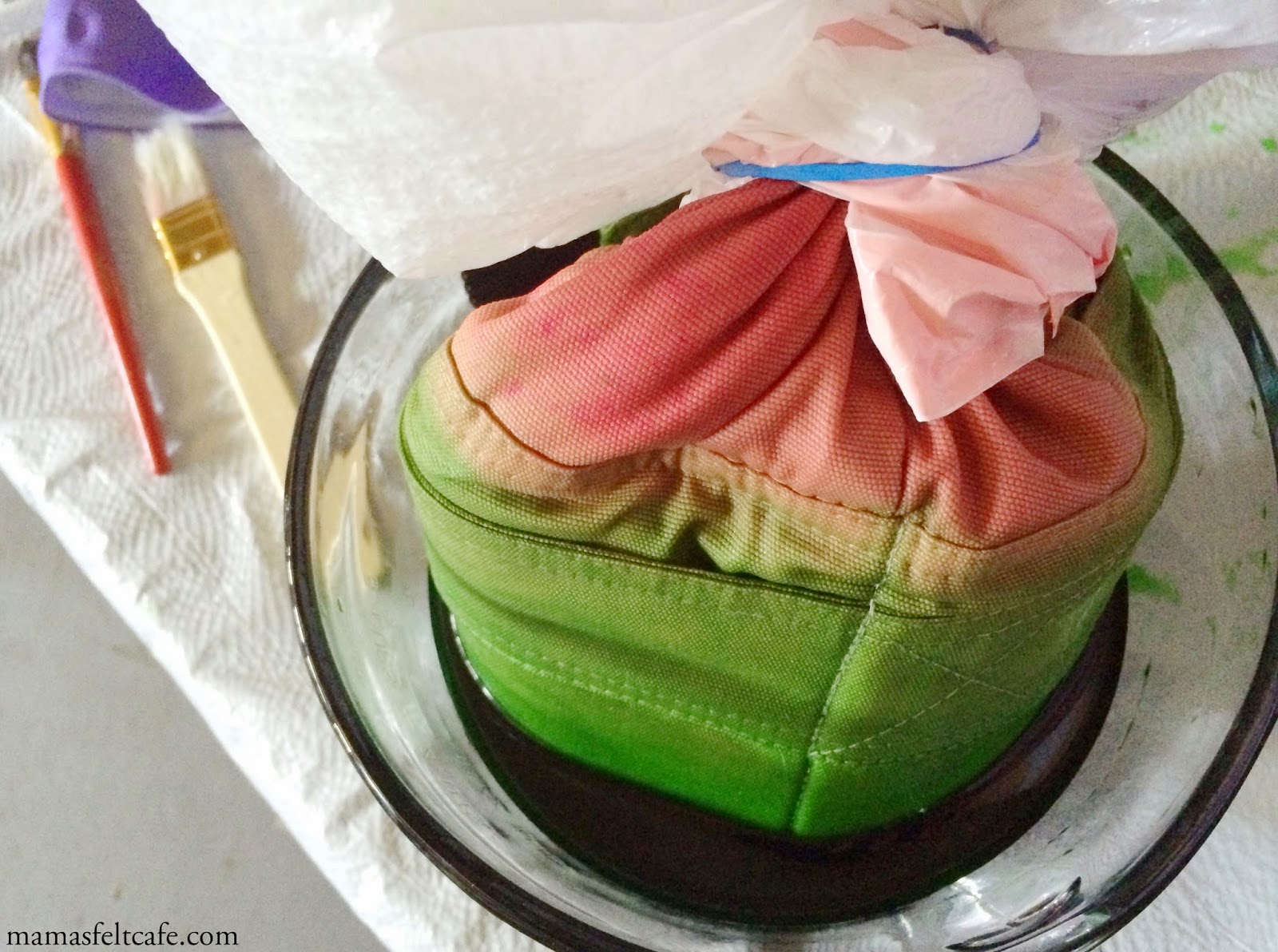 After I had a good base color painted on, I dip dyed the bottom of the Ergo in my cup of dye. I left this in for a couple minutes, letting the dye concentrate at the bottom and moving it up and down. Then I rinsed a bit in the tub and threw the Ergo unbagged into the washing machine. I did a rinse/spin cycle on cold then a warm wash. 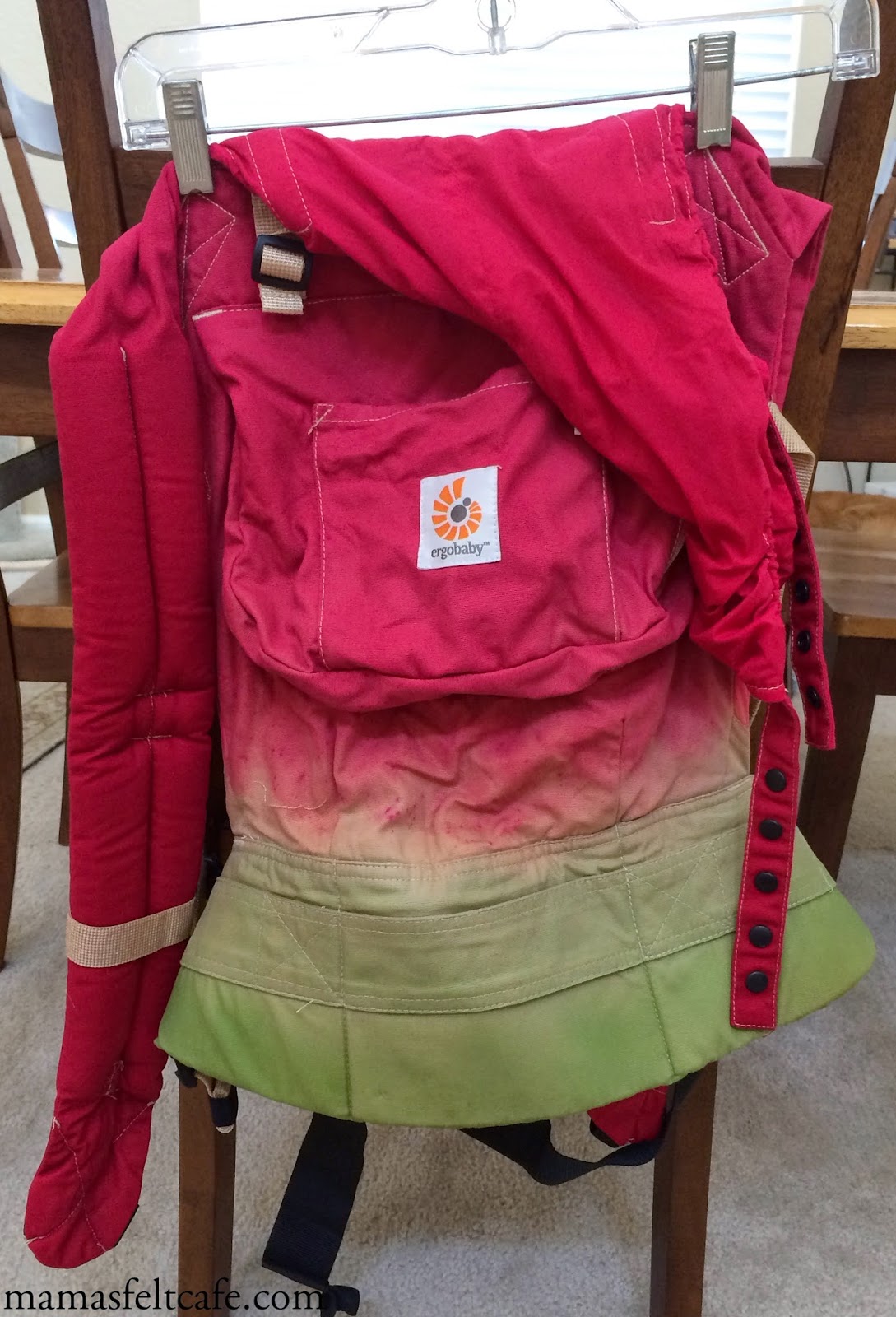 The waistband needed another pop of color so I mixed up a batch of Dylon Dark Green in the same fashion as the Tropical Green and re bagged the red portion. I did the same process with the dark green, painted on with a paint brush, paying close attention the top as to not mix colors and letting the dye flow down and finished with a dip dye at the bottom. 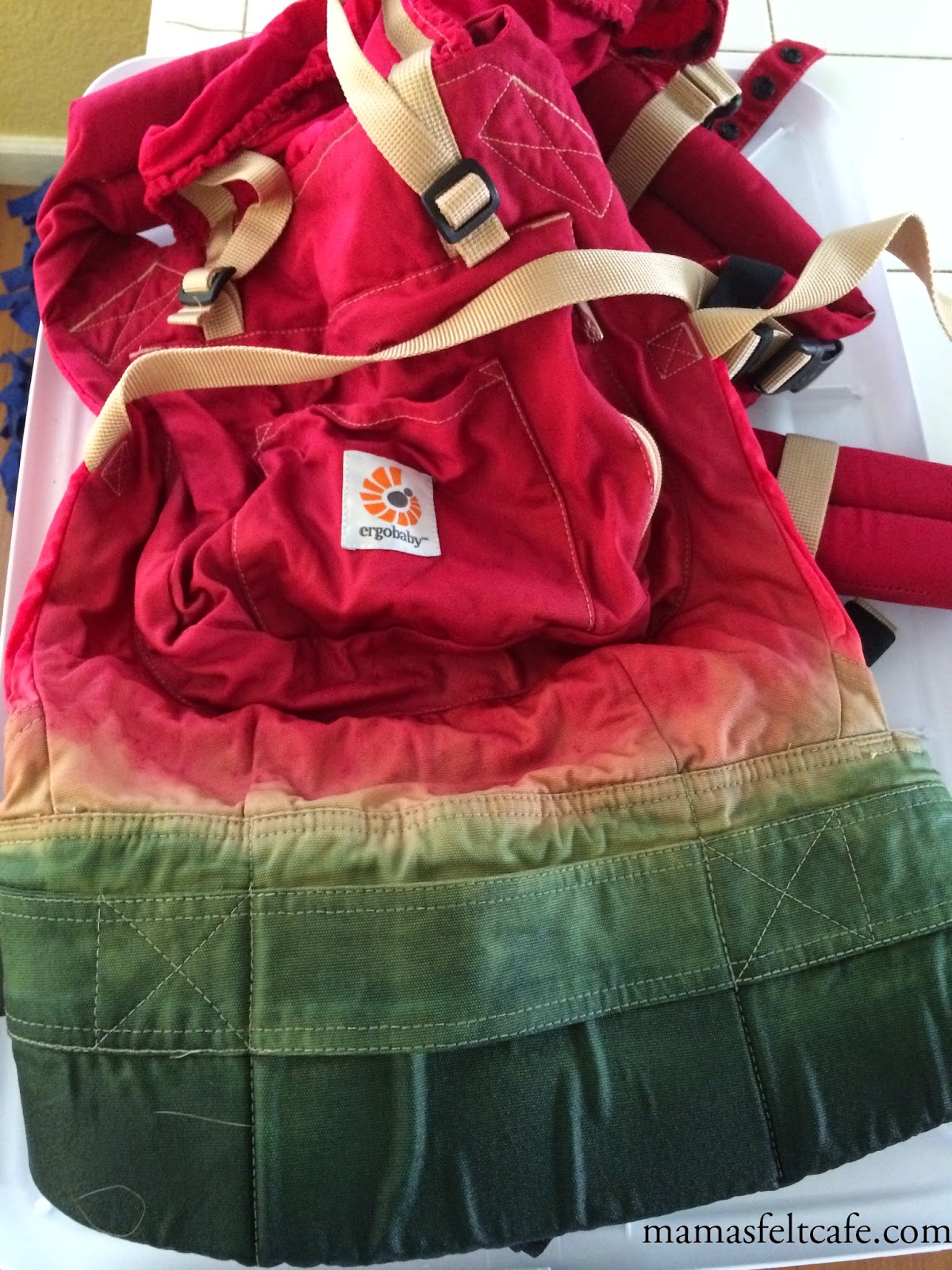 I gave the Ergo another rinse, wash and dry. It was time for the seeds! I used a pencil to outline my seeds first then colored them in with black Jacquard fabric marker. I tried to be balanced with their placement and avoided drawing any on the straps where it is common for babies to suck. 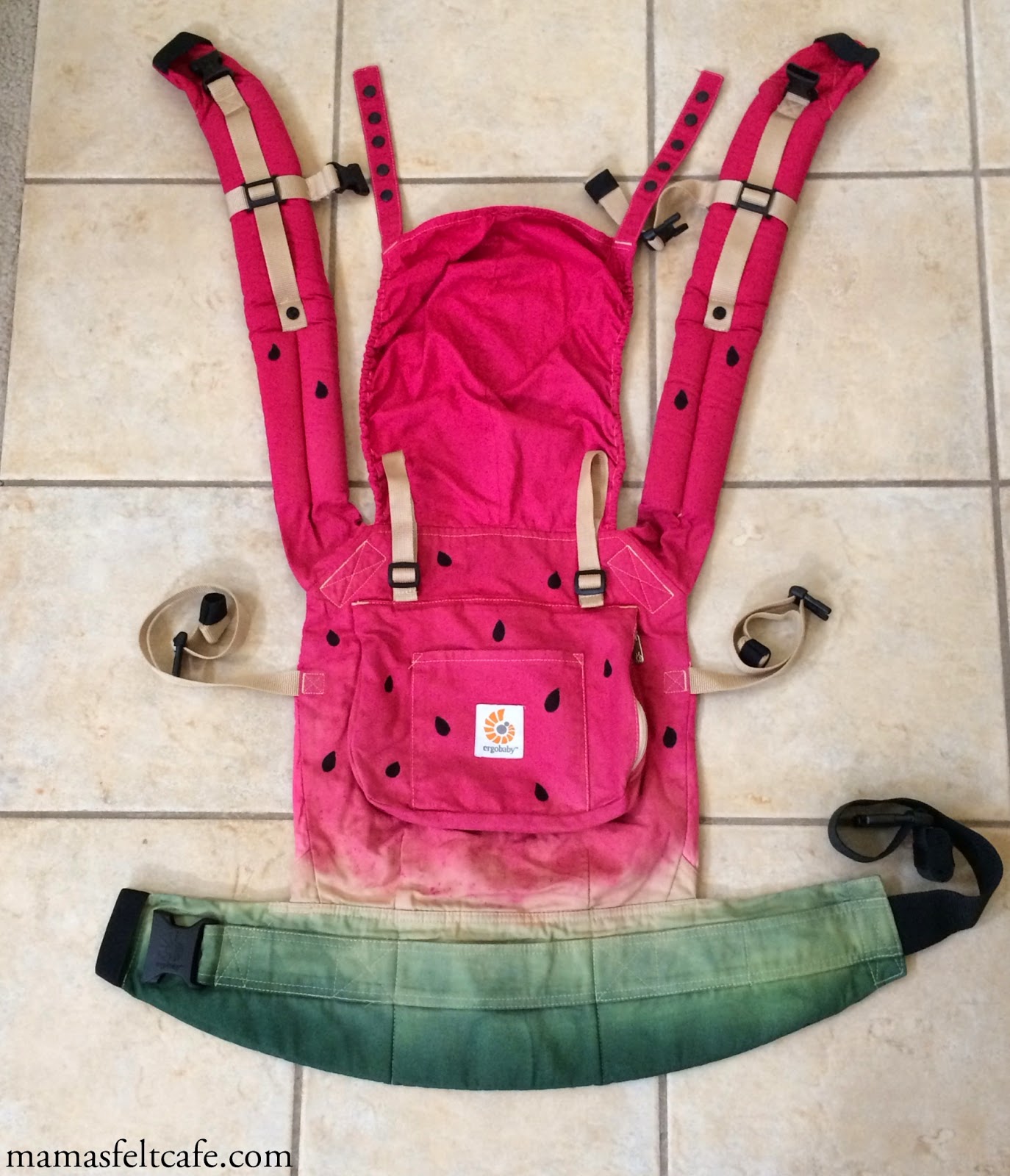 Then it was all done! I'm pretty happy with how the waistband turned out and even though it wasn't in the dye long, the color is vibrant. 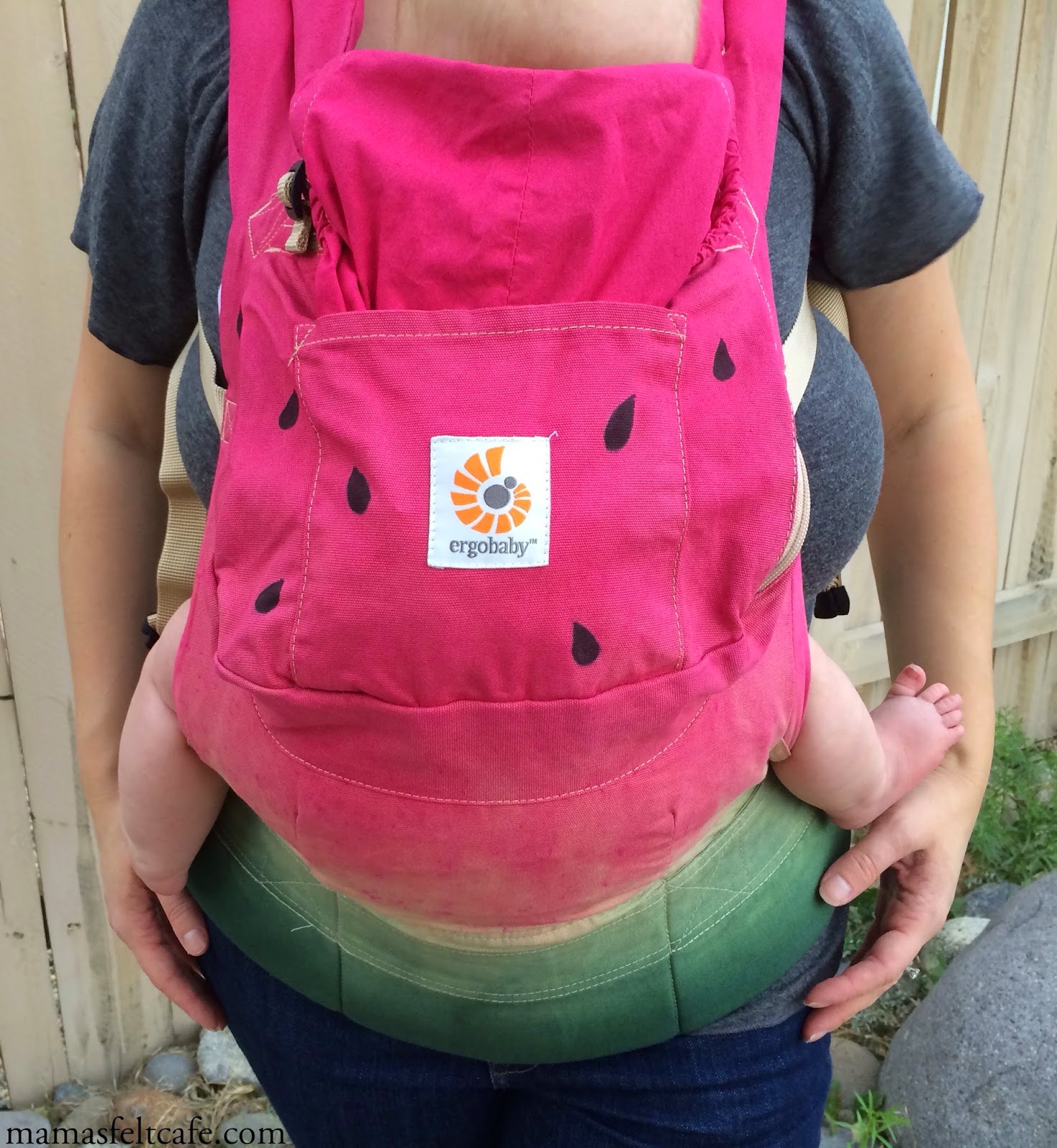 It's like carrying baby in a little slice of summer. Delish!