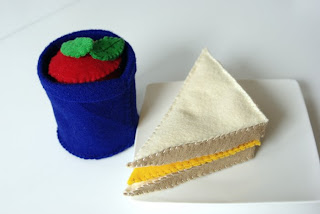 Apparently, April is National Grilled Cheese Month. Who knew there was a month devoted to a fried sandwich? After spending several minutes drooling over Martha Stewart's Grown-Up Grilled Cheese at 8 in the morning, I decided maybe the grilled cheese sandwich was due for some recognition. Since my recent giveaway winner Sheena had wanted to see a felt food tomato soup and grilled cheese lunch set, now seemed like as good a time as any to celebrate some felty, cheesy goodness.
The Ingredients: 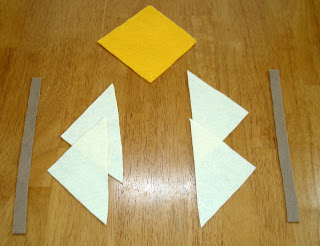 -4 cream felt triangle bread pieces. The two short sides are 4 inches and the long side is 4.75 inches long
-1 cheese felt piece. I wanted my cheese to maintain a gooey look, so I cut the 4 inch triangles like the bread on a folded piece of felt and left the long side on the fold.
-2 tan felt crust pieces, 9 inches long by a half inch wide
-Embroidery Floss to match
-Stuffing for the bread pieces
The Recipe: 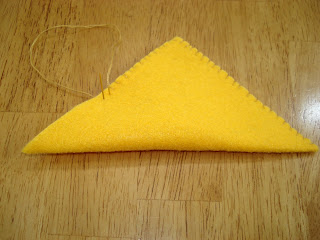 First, let's sew the cheese. Line up the edges and whip stitch the cheese piece closed. The folded edge will be the melted cheese peeking out of the bread. 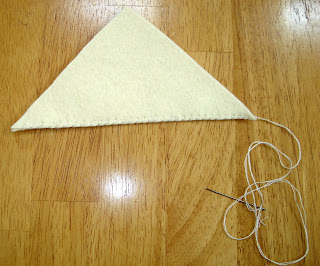 Next, we move on to the bread. Sew the two cream felt pieces together on the long side of the triangle. 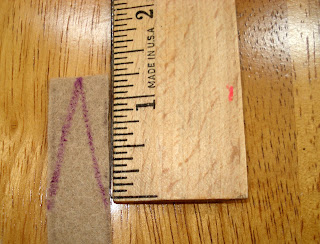 Now we need to sew on the crust. I wanted the sandwich to look like it had been cut in half. To get this effect, we need to taper the end of the crust piece. I measured about 1.25 inches down the end of my crust and drew a triangle. 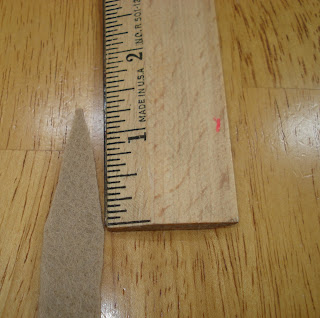 Then, I cut the triangle so that one end of the crust piece has a tapered edge. 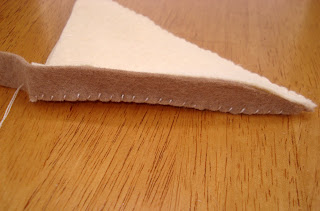 Working from the tip of the taper, sew the crust piece on to one side of the bread. 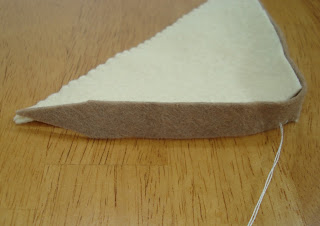 When you turn the corner of the bread piece, you will want to taper the end of the other side of the crust. The nine inches we cut for the crust will be a little long, so trim the crust so that it is even with the end of the bread. Then measure down the same 1.25 inches from the end of crust piece and cut the tapered triangle just like the other end. 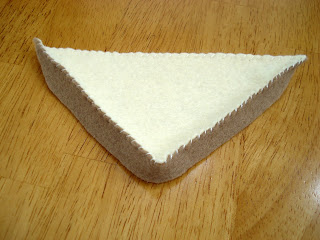 Finish sewing the rest of the crust to the end of the bread. 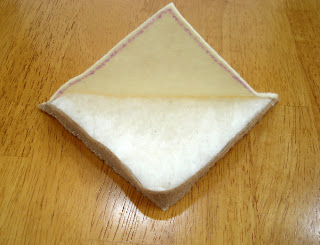 Now add stuffing between the two cream bread pieces. I used some organic cotton batting I found on sale at the craft store. Batting can be great for stuffing bread, pancakes and other foods that are mostly flat but should be stuffed evenly. 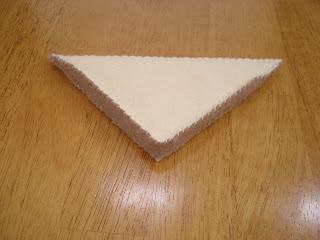 Then, finish sewing the crust piece to the second side of the bread. Follow this same process for making the second slice of bread. 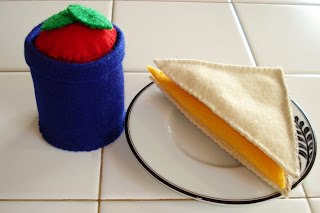 There you have it! A cheesy felt food lunch for your little cook to grill up.
Happy Felt Fooding!
~Brittany
Posted by Mama's Felt Cafe at 10:14 AM