Hippity, Hoppity, Easter's On It's Way--Let's Celebrate With a Felt Egg Tutorial 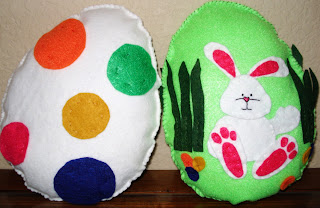 Ah, it's April. Finally, the sun is shining, the birds are singing and the trees in my front yard are showing hints of new leaves. Time to start thinking about Easter Baskets! Admittedly, last year my son's basket was mostly filled with candy that I ate. This year, I made these fun oversized (about 9 inches tall) eggs, which will be considerably fewer calories than all that Easter candy. These eggs are great for Baby's First Easter and beyond!
The Ingredients: 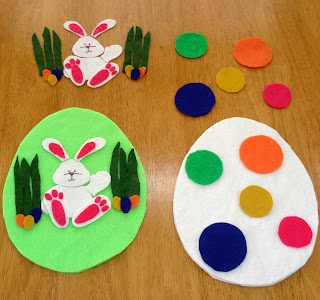 -4 egg shaped felt pieces, two white and two bright green, front and back for each egg
-Assorted sized circles in various colors for white egg
-Two bunny appliques (see below), one for both sides of the egg, 12 pieces of grass from dark green felt (about 2.5-3 inches tall) and 12 little felt eggs for the green bunny egg
-Embroidery Floss to match
-Stuffing and two bells
The Recipe: 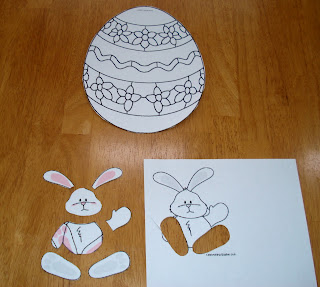 Thanks to the internet, you almost never have to reinvent the wheel, or the egg in our case. I couldn't draw an egg free hand if my life depended on it, but I sure can trace a image of an egg as a pattern. I found the image that I used for my egg on a stained glass pattern site. I saved the image and opened it in MS Paint, reduced it to 75% and printed it out. You could work with the image as is, too. It will just be a bit bigger than mine.
Once you have your egg pieces cut, let's move on to the bunny applique. I found the bunny image with a quick clip art search. That particular bunny translates to an applique really well as the pieces are big and easily traceable on felt. You will want to print out three copies of the bunny image. 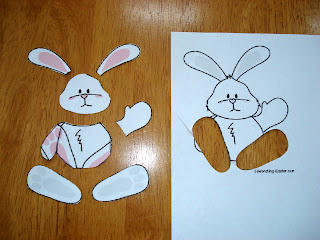 With the first bunny image, cut out the ears, head, hand and feet. 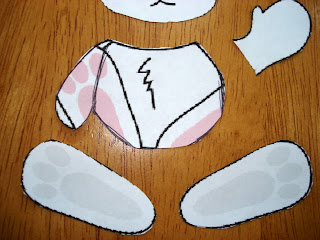 With the second bunny image, we want to make the belly pattern piece. Since the images looks like the bunny's hand is behind his foot, I drew in where the arm and the bottom of the belly would be if the feet weren't in the way. With the third bunny image, cut out all of the pink parts--ear lining and the pads of the bunny's feet. Now we have a pattern for all parts of the bunny. Trace and cut all the white and pink bunny parts. When you trace the pattern for the bunny, remember to flip your pattern over so that your trace marks will be on the back of the felt and the felt bunny will look the same as the original (otherwise you will have a mirror image). 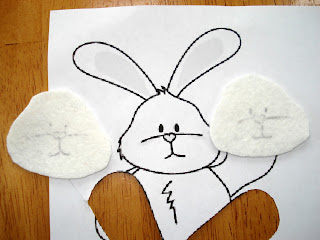 Next comes the bunny's face. A well lit window is your friend. I placed the felt head over the pattern on the window and was easily able to see the pattern underneath. Do this for both your bunny head pieces. 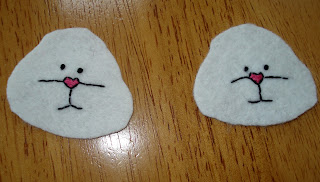 Cover the face tracing with black embroidery floss, save for the nose, which is filled in with pink. The eyes are French Knots. 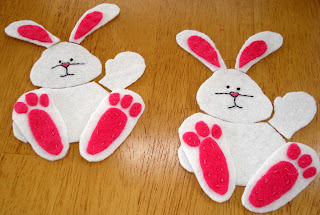 Next, sew on the pink pieces to the ears and feet for both bunnies. I kept this simple with a few running stitches. Now the appliques are ready to go on the egg! 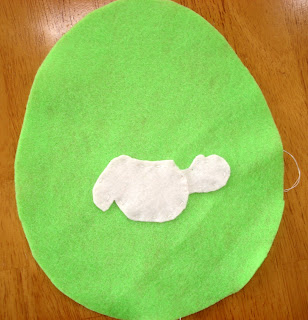 Start with the body first. Tuck the waving hand slightly under the body piece and make sure to sew through the belly and the hand when going around. Again, these are quick and easy running stitches. 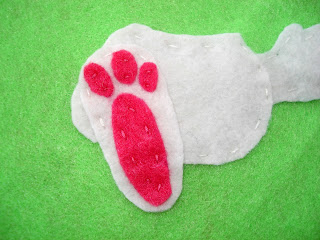 Next comes first foot. Be sure to leave a little of the arm peeking out behind the foot like the original image. 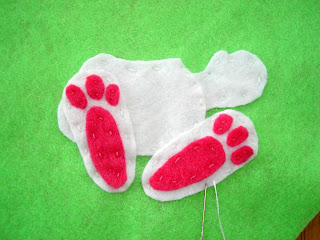 Now, sew on the second foot. 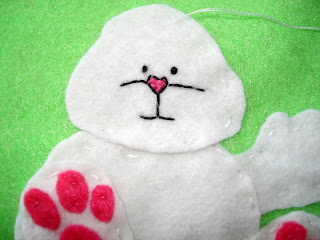 Now, sew on the head, but be careful to stop before you get to the top. 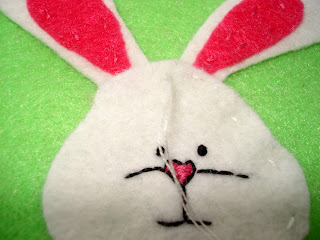 Add the ears underneath the head and be sure to catch all the pieces when you sew around. Be sure to attach the ears to the egg once the head is sewn. 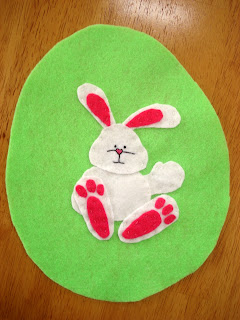 Our first bunny is on the egg! 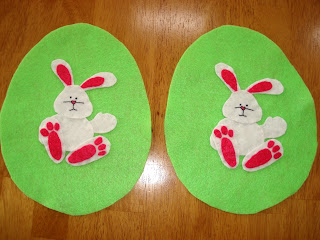 Now repeat bunny's placement with the second side of the egg. 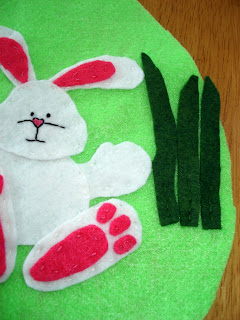 Next comes the grass. I left the ends of the grass free and only sewed about half way up, using back stitches for some extra strength. 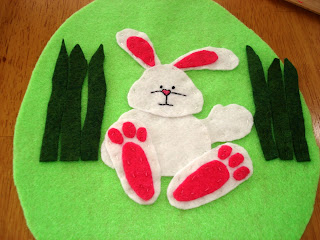 Add grass to the other side of the bunny. 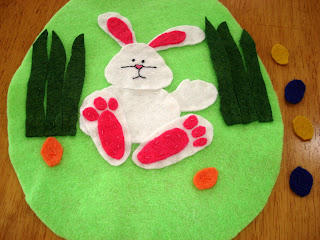 Next come the bunny's Easter eggs. I did orange, yellow and blue but you can use any colors you wish. 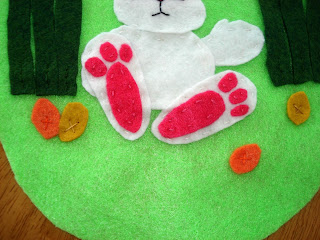 I attached each little egg with an "X" stitch. 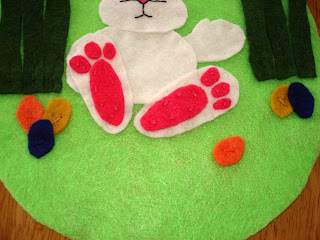 The blue egg is the last one! Now repeat all that grass and egg placement fun on the second side of the egg. 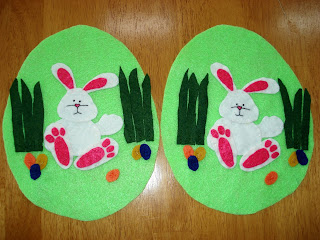 Our bunny egg is almost done! Whip stitch the two egg sides together and stuff. I added a bell with the stuffing so the egg would have a musical jingle. 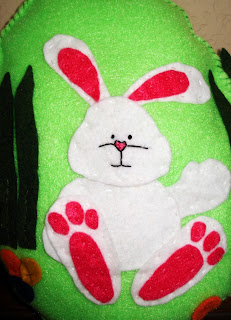 The bunny egg is now complete! The polka dot egg will be a breeze after the detail of the bunny egg. 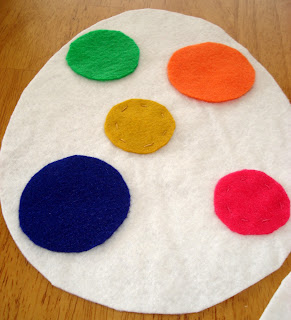 Start by sewing your various sized polka dots to one side of the egg, 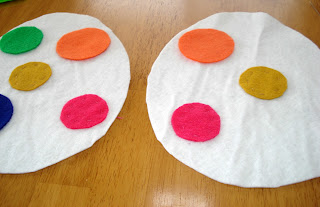 and then to the other side. 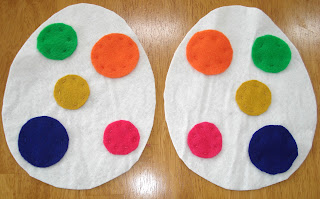 I tried to place my dots at roughly the same spot on both sides of the egg so that they mirror each other. 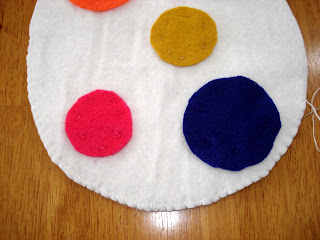 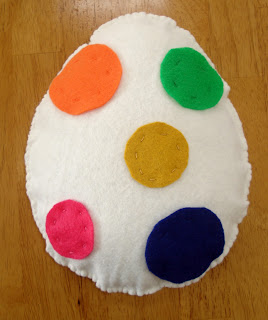 Our polka dot egg is done! See, wasn't that easy? 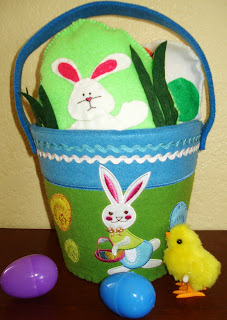 Now you are ready to stuff some Easter Baskets!
Happy Felt Fooding!
~Brittany
Posted by Mama's Felt Cafe at 6:39 PM