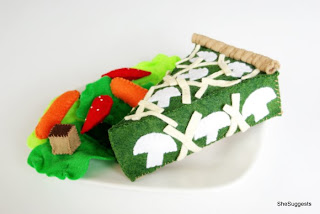 Recently, my friend Ashleigh over at Scrunch Nose Sews mentioned that she made a real life quiche, and I was instantly taken with the idea of making a slice out of felt. The basic design of this tutorial can also be used to create other pies--simply change the colors and the items sewn on the top and sides. I used my same pattern to also make a slice of cherry pie. 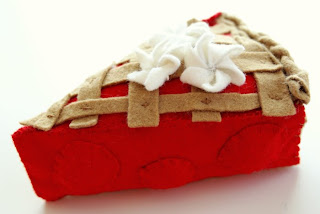 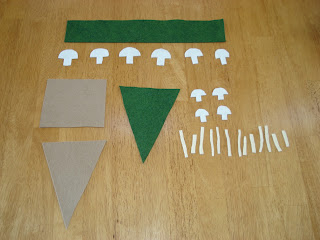 -2 triangle top and bottom pieces, one in green and the other in tan felt. These measure 5.5 inches for the long sides and 4 inches on the short side.
-1 quiche "filling" strip in green felt, measuring 11.5 inches long and 2 inches wide.
-1 pie crust back rectangle, measuring 4 inches by 3.5 inches
-6 large mushrooms for the side of the quiche, about 1.5 inches
-4 small mush rooms for the top, about three quarters of an inch tall
-various cheese shreds in cream felt. I used more than shown here, probably 20 but you can do as much as you would like.
-Embroidery Floss to match
-Stuffing
* As a side note, it was asked if I was going to include PDF patterns in my blog. I thought about this and decided I will keep my tutorials with piece measurements when necessary. That way, anything that is sewn is still the work of the creator as you will have to measure and make your own patterns from my suggestions.
The Recipe: 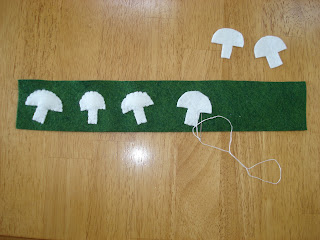 First things first, we need to affix our embellishments before we construct the quiche. I started with the large mushrooms on the side. Be sure not to place a mushroom too close to the center of the side strip as we will be folding this in half to attach it later.The mushrooms can be sewn on flat or they can be stuffed slightly like mine are here. 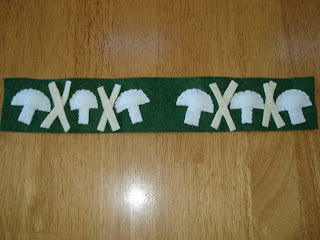 After the mushrooms are sewn on, I back stitched some crossed pieces of cheese in between the mushrooms so that the quiche has layers. 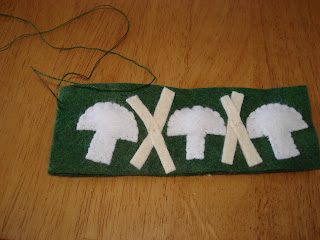 Next, fold the green strip in half and sew a whip stitch down the center of the piece. This will give our quiche a nicely defined slice look. It also makes it easier to line up your pieces when you sew the top and bottom to the sides. 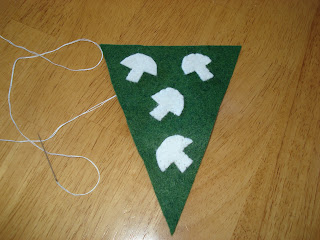 Now that our quiche sides are done, let's move on to the top of our slice. I whip stitched the smaller mushrooms to the green triangle piece. 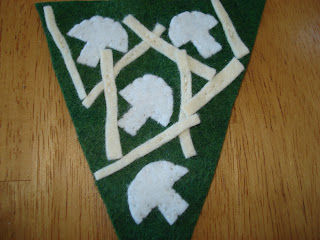 Next, attach pieces of your cheese all over the top piece. I just did a couple back stitches in the middle and left the ends of the cheese free. 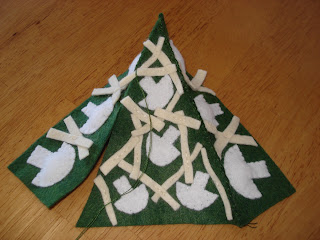 Once you have a sufficient amount of cheese sewn on the top, it's time to sew it to the side piece. Be sure to line up the point of the slice with the seam you sewed down the center of the side piece. 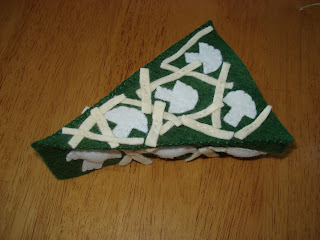 After the top and sides are attached, it's time to sew the tan triangle crust piece to the bottom. 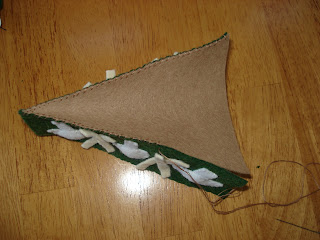 Like the top, make sure to line up the triangle point as you sew. 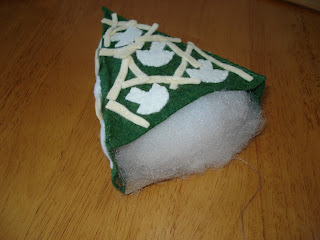 When the bottom is sewn, add stuffing to your slice. 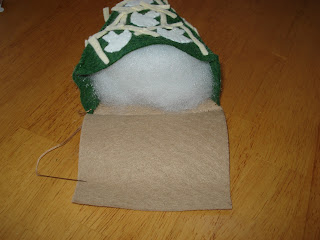 The back of the pie crust is the last piece to go on. I sewed along the bottom first, to make sure the crust went on straight. 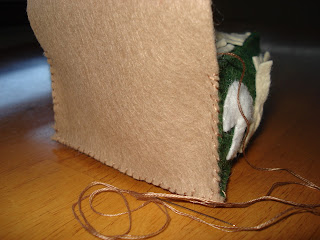 On the sides of the back of the crust, only sew up until it meets the top of the spinach piece. 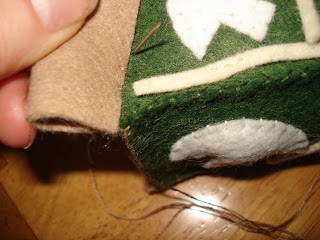 Now fold over the top of the back crust and sew the raw edge to the spinach top piece. Be neat with your stitches since they will be visible in the back! 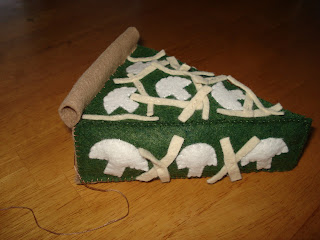 Almost done! Now that the crust is fully attached, the last step is to do a large whip stitch to give the top of the crust some shape. 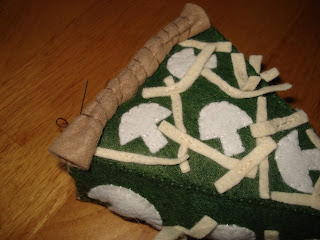 You can play around with the angle of the stitch and the tautness of the thread to give your crust different looks. 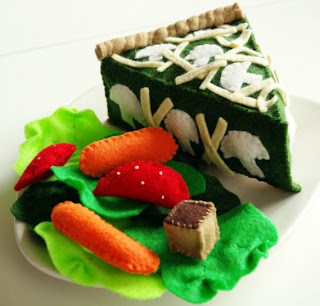 There you have it! A quiche worthy of your Little Cook's Sunday Brunch.