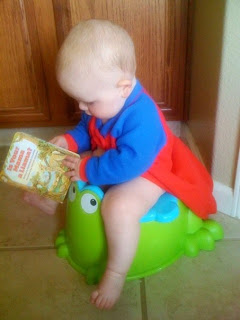 When I was pregnant with my son, I came across the term Elimination Communication (EC for short, AKA Infant Potty Learning) but didn't really understand the concept. Knowing when your baby, even a newborn, needed to go and "catching" a pee or poo before it hit the diaper (assuming baby was even wearing a diaper) seemed nothing short of a paranormal psychic ability. I wasn't even sure I wanted to use cloth diapers! I did have 4 younger brothers growing up, so it seemed like there was always a boy being potty trained at our house. I was intrigued by the idea that EC could ease toddler potty woes.  After Asher was born and I got to know him a bit, it was pretty clear that he actually did signal to let us know he was going. He would squirm, grunt and kick his legs before a poop and would pop on and off while nursing before he peed. 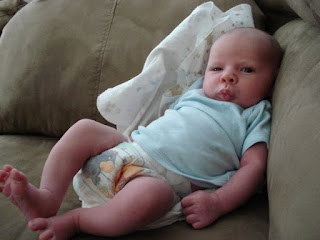 3 weeks old in a disposable diaper
After I talked to a couple new mom friends who had been successful with part-time EC with their girls, I decided to revisit the idea. I spent some time on Tribal Baby reading about how to get started, I read posts in the Mothering.com EC forum, and I looked around Diaper Free Baby. Once I felt I understood why parents would do this (I mean, who wants to poop all over themselves, baby or no?), I watched some videos on YouTube to see how others positioned and cued their babies on the potty. Finally, when Asher was about 11 or 12 weeks old, I decided to just go for it and tried pottying him over a bathroom sink. Much to my surprise and delight, he went pee! The next day, I went out and got a high backed Bjorn potty chair. 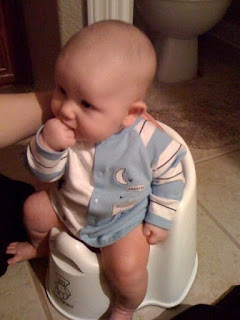 3 months old
I mostly relied on timing to catch pees in those early days. I would sit Asher on his little potty first thing upon waking, after naps, a few minutes after nursing and before bed. I would also try if it had just been a while since he went last and I thought he might have to go. I became frustrated with disposable diapers quickly. I would miss a small amount of pee and catch the rest on the potty but have to toss the barely used, expensive diaper. I ordered some G-Diapers when they came on sale at Babysteals.com and happily saved the $20 a week we had been wasting on disposables. I'm not sure I would have switched without EC as a catalyst, but the money saved from buying disposables plus not having to wash cloth diapers by catching in the potty has easily been hundreds of dollars.
By 5 months, Asher regularly peed and pooped in his potty. As he grew bigger, we upgraded  to a larger potty with more leg room. 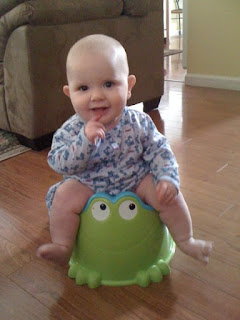 6 months old
By 8 months, Asher started regularly staying dry all night, as long as he went potty before bed. He would go if either my husband or I took him. We even EC'ed out and about at places like restaurants and parks. It really wasn't any more difficult than diapering. EC just requires paying attention to your baby and being proactive, rather than reactive, to their toileting needs. 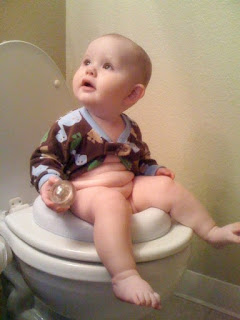 10 months old
By ten months, a cushy potty ring on the regular potty was Asher's favorite place to go. We entertained him with toys, books, and songs, making potty time fun and engaging, far more interactive than a regular diaper change. It also felt good knowing that Asher could communicate his needs to us and knowledge of EC has helped me decode what would otherwise be baffling baby behavior. 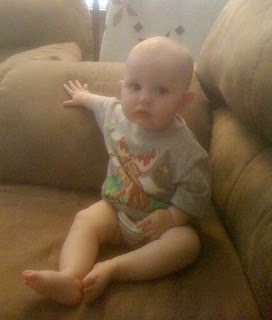 First Birthday, first day in underwear
By the time Asher's first birthday rolled around, he was very potty proficient. He spent the whole of his birthday in little underwear and only had one pee accident. We rotated between diapers and underwear, though I tried to do underwear as much as possible when we were home and save diapers for when we were out and about. 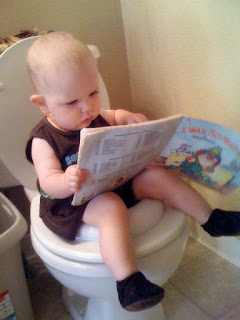 13 months
As toddlerhood approached, things got a little trickier. Asher could stand, then walk, then run. It was harder to get him sit for the potty long enough to go. This period often referred to as a potty strike and tends to be very common. I relied on timing, lots of potty time distractions, and patience. If we had a missed, I tried to react calmly. The goal of EC is not early potty training, but rather responding to your child's needs. Rolling with the punches and adapting to Asher's changing stages was the best I could do. 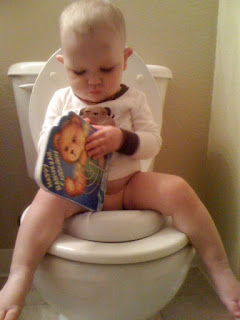 18 months old
Now, as Asher's second birthday is coming up in a couple months, we are back to a mix of cloth diapers and underwear. Some days are better than others with catching, usually dependent upon how much I'm paying attention. We're still not potty independent yet , but I know the effort has been worth it. Every caught elimination has saved a diaper. We never had poop explosions up my son's back. And I've caught more in the potty than I ever had to change in diapers. If I were to have another baby, I would start ECing even sooner, likely from birth. I may have started as a skeptic, but I now truly believe babies make all their needs known, we just have to listen to what they are trying to tell us.
For more information about EC, please check out these resources:
Can A Baby Really Be Diaper Free?
Diaper Free Photo Gallery
Tribal Baby
The Diaper Free Baby

As my son is now almost 2.5 years old, I thought I would update on our EC journey. Asher is now in under wear full time and has been for several months. And while we still have occasional pee accidents (the reclined nature of the car seat must trigger potty urges) I still consider Asher to be potty independent. We even went to visit family over Christmas and he stayed dry in undies the whole time despite long car rides, unfamiliar hotel rooms and potties not his own.  The transition from diapers to undies was really rather uneventful and every time he goes in his frog potty, I am thankful to no longer be wiping out smooshed poop from all his cracks and crevices! 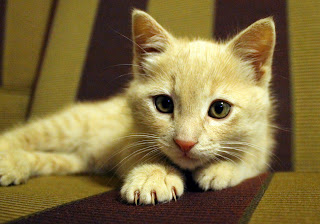 In related news, we brought our new kitten with us on our Christmas trip. Miles J. Cat is still too young to leave home alone and we couldn't find a kitten sitter over the holiday. Elimination Communication skills can come in handy when dealing with pets, too! He would start getting feisty if he had to go and his litter box wasn't available. He went the whole trip without an accident too!
~ Brittany
Posted by Mama's Felt Cafe at 1:48 PM