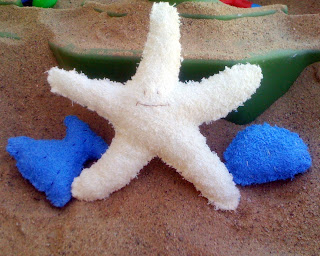 My parents got my son this awesome sand and water table for his second birthday. He's pretty much played with it everyday since he's had it. I was intrigued by the idea of soft sand and water toys, something machine washable. 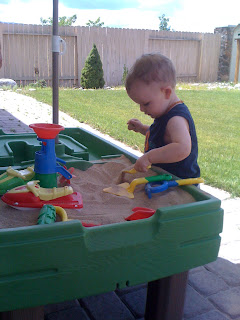 I thought terry cloth would be a good medium for water toys. I marched down to the fabric store and got some blue and yellow terry. 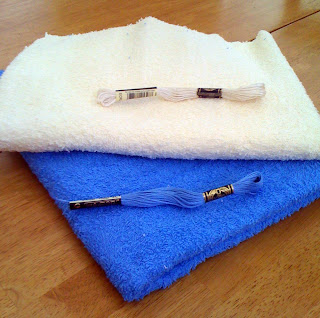 I settled on some nautical themed toys and wanted to make a starfish and some sea shells. Here is a quick tutorial for making your own terry cloth starfish toy!
The Ingredients: 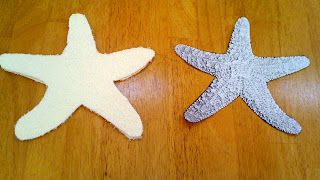 -2 pieces of yellow terry cloth for the starfish
-matching thread
-polyfil stuffing (this is machine washable)
The Recipe: 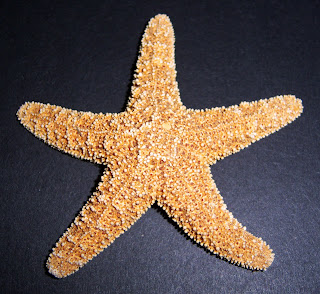 The first thing I needed to do was find a starfish to trace. I did a Google image search to find a picture I thought would make a good pattern. I found this guy on a website that sells Hawaiian treasures. I opened the picture in Picasa, scaled it to print on an 8X10 page and printed it in black and white to trace. 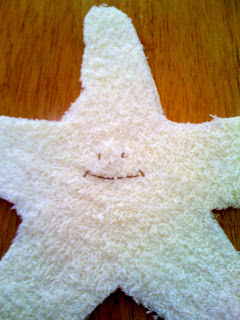 I wanted my starfish to have a little personality, so I stitched a little face on the center. Nothing thing fancy, just enough to give him a little smile. 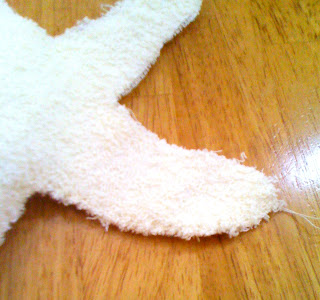 Next, I whipped stitched around the first arm of the starfish. The terry hides the stitches really well. Keep your stitches close, though, as terry tends to fray. 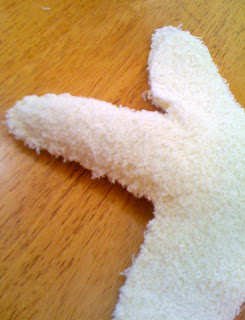 As you sew, stuff the arm as you go. If you don't it will likely be a pain getting stuffing all the way to the ends. Keep sewing and stuffing until you get back to the place you started and knot off. 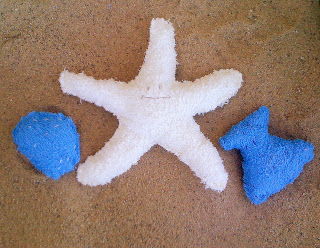 That's it! Now you have a cuddly starfishy friend, perfect for the bath or the beach!
Happy Sewing!
~Brittany
Posted by Mama's Felt Cafe at 3:14 PM